New laws will see blue badges issued to those with hidden disabilities, but councils already have discretionary powers to give the parking permits to those with autism and mental health problems. Here we show how some councils still refuse to use this discretion and insist on seeing disability as a purely physical issue. Darren Devine reports. 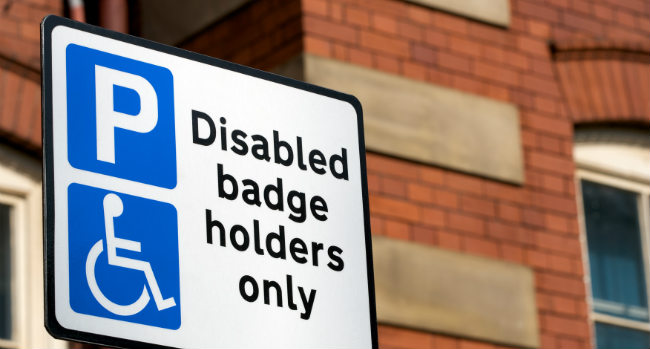 It was heralded as a momentous shift in government policy finally signalling that the moment when those with hidden disabilities would be given parity of treatment with wheelchair users had arrived.

"While one set of officials has decided his disabilities are so severe he is entitled to a Motability car, another say they don’t impair him enough to give him a blue badge."

In the summer, the government announced plans to change the law so those with autism and mental health conditions would benefit from the blue badge parking scheme.

Those with physical disabilities already benefit from this scheme that allows people to park closer to their destination, including on double yellow lines.Charities like the National Autistic Society (NAS) had long campaigned for the change to help relieve pressure on families that can end up isolated by overwhelming challenges.

But the small detail you might have missed had you read only the headline is that those with hidden disabilities can get blue badges now.

Councils already have discretionary powers to give them to those with hidden disabilities; legislation is needed only because some choose not to.

The inconsistencies around blue badges were never better illustrated than in the case of Lesley Staines’ 19-year-old son Lewis, who is severely autistic and has a learning disability.

Staines, 55, from Romford, in the London Borough of Havering, says Lewis has no awareness of traffic and cannot cross roads safely. Lewis, who is 5ft 8ins tall and 18 stone, would attack his mother if she tried to stop him crossing the road.

So a blue badge would make it safer not only for Lewis to get to his destination, but also his mother and drivers on the road.

“It’s dangerous for the passing driver because they would hit Lewis and it’s not their fault. So there’s three people here getting involved in a situation all because Lewis is not able to cross the road by himself.”

Staines' other son Mitchell, 21, also has severe autism and a learning disability; he qualifies for both a Motability car and a blue badge.

While Mitchell is still in nappies, Lewis, who his mother says has the mental age of a two to three-year-old, has a little more understanding and speaks in single words. Both brothers have epilepsy and are non-verbal.

However, despite needing the blue badge that his brother has, Lewis only qualifies for a Mobility car.

But Staines says she doesn’t need this because she can manage with Mitchell’s car. Because Lewis can walk 200 metres unaided, he is being denied a blue badge.

Mother-of-two Staines believes it’s grossly unfair that while a wheelchair user with a missing leg who can assess when it’s safe to cross automatically qualifies, Lewis does not.

She said: “I’m not denying he can walk, but he can’t walk safely.”

Whilst one set of officials has deemed Lewis' disabilities so severe that he in entitled to a Motability car, another say they don’t impair him enough to give him a blue badge.

If Lewis' needs mean that he qualifies for a Mobility car, then why does he not qualify for the blue badge that would allow him to benefit from the full freedoms that the vehicle is intended to bring?

Single-parent Staines was originally given a badge for Lewis around a decade ago.

But when he approached his eighteenth birthday he fell into the first group of people being moved from Disability Living Allowance (DLA) to the Personal Independence Payment (PIP) under government reforms to the benefits system.

And though Lewis lost none of his benefit in the transition from DLA to PIP, last year - when Staines tried to renew his badge through Havering Borough Council - she was told his mobility was insufficiently impaired.

She appealed, but to no avail — Lewis is still without a blue badge.

Last year Michelle Lahney started a petition to help children with autism get blue badges after her five-year-old son Brody was turned down by Hartlepool Borough Council.

On petitions site change.org, she tells how her autistic son is non-verbal, has no understanding of danger, and would “walk straight into traffic”.

Brody was turned down because he could walk: a criteria Lahney maintains has a “devastating impact on the lives of many children with autism and their families as they become isolated”.

In June, Lahney posted that her son has now been given a badge and she hoped the government’s legislative changes would mean all children like Brody "will automatically be awarded a badge”.

Earlier this month the local government and social care ombudsman found that Lancashire County Council denied a man with Down's syndrome a blue badge without ever assessing him in person.

The man’s father applied to renew his badge in September 2017, but was wrongly told by the council that walking difficulties arising from cognitive impairments could not be taken into account.

Ombudsman Michael King ordered the council to apologise to the man for the failure to offer his son a face-to-face assessment and pay him £250 for his time and trouble.

King also insisted the authority review how it deals with blue badge applications to ensure it does not discount those people with variable and hidden conditions.

Head of policy for the NAS Sarah Lambert has said councils should use their discretionary powers to give the parking badges to people with autism immediately, rather than waiting for the law to change.

She said: “The rule changes the government recently announced, and their accompanying guidance, won't come into force until next year.

“But, we'd urge councils to use their discretionary powers to start giving blue badges to those autistic people who need one now.”

The Department for Transport (DfT) say they provide guidance to councils on when to issue badges, but that each application “should be considered on its merits — not on a one-size-fits-all basis”.

Existing rules say people with conditions like autism may be eligible if they are “unable to walk or have very considerable difficulty in walking”.

The final decision rests with councils and the DfT stresses it has “no power to intervene”.

The Local Government Association (LGA) has also said individual councils must decide how to use their powers on issuing badges.