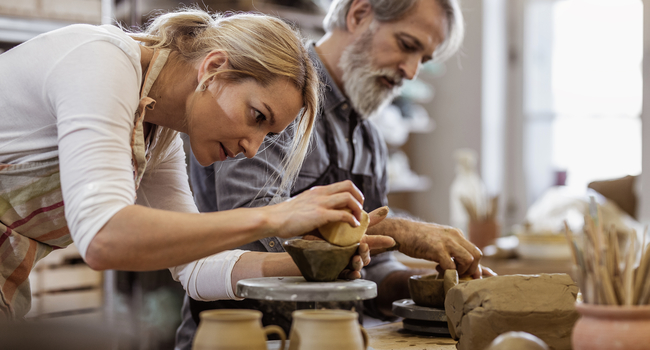 Twenty-six-year-old David Havlíček lives and works in the village of Neratov in the Czech Republic. David has a learning disability, and has been in children’s homes and institutions for most of his life. After his brother drowned when David was just eight years old, his mother couldn’t cope and sent David to a children’s home. He was separated from his family for more than a decade, and can only describe those years as “not exactly lovely.”

“I definitely don’t want to leave this place. My past was bad. But the present here in Neratov is perfect.”

The Czech Republic has a difficult relationship with disability. The country was under communist rule for more than 40 years from 1948 to 1989, overseen by a regime that violently repressed anything or anyone less than their ideal of perfection. Rumours and misinformation were spread that disability was contagious, and those with disabilities were condemned as dangerous and destructive.

Thousands of families were forced to take their loved ones to doctors, who ordered for them to be removed from their families and shut away in asylums for years or lifetimes. Many didn’t survive. With the fall of communism in 1987 came a new era for disabled people, but it would take decades to change perceptions.

Against this backdrop, one man was trying to make a difference. Father Josef Suchar became priest of a parish that included Neratov in 1991. It had been abandoned after being set on fire during World War 2. Father Josef decided that, not only was he going to rebuild the village, but that it should be a place of safety for disabled people.

“We set up the Neratov Association with the purpose of bringing life back to this place,” he says. “We wanted people with disabilities to have their own community, a place they could shape and decide on its future direction. Each and every one of us should be given the chance to do good things, there should be no exception to that.”

Over the last 20 years, the Association has grown to exceed this aim. Two hundred and fifty people now live and work here, 80% of them living with disabilities. They include 37-year old Kvètoslava Čapková, who has epilepsy and a learning disability, and has struggled most of her life to make her way in the world. With few options available for paid work, and vulnerable to abuse and mistreatment when she did manage to find a job, Kvètoslava ended up homeless on the streets of Prague, becoming so malnourished and dehydrated that it took her two months in hospital to recover.

Kvètoslava applied for a job as a cleaner and assembly-line worker in Neratov two years ago, with sheltered accommodation provided. It has turned her life around. “Homelessness was a horrible experience,” she says. “I wouldn’t ever want to go back to that. I didn’t want to live. But now I am alive, and I am here, and I couldn’t be happier. I have friends here, I love the landscape. It’s beautiful.”

She is not the only one who speaks highly of the change Neratov has brought. David now works in the village’s microbrewery, helping to produce a range of lagers that are stocked in bars throughout the country. “It’s a passion for me,” he says. “I’m learning new skills so I can lead an independent life."

Many people are employed in workshops where they receive training on artisanal skills including pottery, weaving, and printing. The goods they produce are sold in local shops and supplies some of the Czech Republic’s biggest companies, including Siemens. Other employees work as gardeners in the village’s market garden, where produce is grown to supply the pub and restaurant with the surplus sold for profit.

Word has spread throughout the country about how successful the venture is. In 2018, many residents took part in a national Facebook Live event to sell their goods as Christmas presents, resulting in more than 250 orders. It was part of a push for tourists to visit while they are hiking or cycling in the surrounding Eagle Mountains, a beautiful area that traces the border of Poland for 25 miles, resulting in 40,000 visitors a year – each bringing income that helps the village chart its own course.

Fifty-two-year-old Hana Hronovská has lived in Neratov since her mother died nine years ago. She works as a cleaner in the tourist accommodation, and is relishing her independent life. “I enjoy painting and seeing a little bit of the countryside,” she says. “I’m happy I can make money and I have a little in my bank account. I can buy myself clothes – my supervisor and I go the city and I can buy things from the coffee shop. It’s a freedom for me.”

The Czech Republic has come far in the last 30 years, and now has a policy of inclusion for children with mild learning or physical disabilities into mainstream schools. There are also policies in place that require companies over a certain size to employ a percentage of people with disabilities or to buy a percentage of their stock from companies that employ disabled people.

That income has helped the Neratov Association earn enough to ensure the village is financially self-sufficient – and there is enough to put in place big plans for the future including new sheltered housing, respite care facilities, and a second restaurant to feed the growing number of tourists wanting to support the village's growth.

Everything that happens here has been planned and carried out in partnership with the residents and workers of Neratov, giving them a say over their own futures, for the first time in their lives for many. As David says, “I definitely don’t want to leave this place. My past was bad. But the present here in Neratov is perfect.”