Nearly 12,000 people have signed a petition to stop the dissection of a replica of Joseph Merrick’s body, who was sadly known as the “Elephant Man”.

The ‘Dinner and Dissection’ event, hosted by ITAE Productions, uses pig organs placed inside silicone bodies, allowing a live audience to feel as though they’re taking part in a human body dissection. The dissection will be performed in front of hundreds of onlookers, eating and drinking, in a circus tent.

The event has caused outrage across the disability community, with campaigners likening it to a modern-day freak show that encourages the “exploitation and objectification” of disabled people.

Joseph Merrick is thought to have had a series of mosaic genetic mutations, specifically Proteus syndrome – a rare disorder characterised by overgrowth of various tissues of the body. His syndrome led to him being rejected by his father and step-mother and exhibited at freak shows in the 1880s, where he was dubbed “the Elephant Man”. 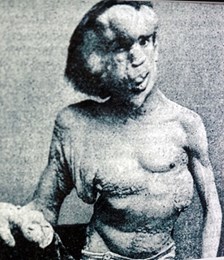 “Disabilities should not be exploited for income”

The petition to stop the show was started by Karen Diamond, who has a two-year-old daughter called Willow with a similar pik3ca-related overgrowth syndrome.

Ms Diamond said she started the petition alongside other parents of those diagnosed with mosaic mutations to stop the show going ahead and to hold ITEA Productions and Dragons’ Den accountable for their “shaming of people with disabilities”.

She writes: “It is despicable to think in 2021 we still think it is ok to exploit people with disabilities in such a way. The thought of my daughter growing up and knowing that people dined and drank while enjoying watching that in a circus tent breaks my heart.

“Disabilities should not be exploited for income. They should be welcomed in modern day society and awareness should be made in a positive and dignified manner.”

Merrick would be “righteously angry and completely heartbroken”

Actor and broadcaster Adam Pearson is among the thousands of people concerned about the show. Although his condition is different medically, it "presents similarly" to Merrick’s.

He told the BBC: “I think if Joseph Merrick knew that this event was happening he’d be righteously angry and completely heartbroken. A man who has so much more to him that just his disability. A man who was a gentleman, a scholar and an artist. He’d be devastated, and rightly so.”

Sam Piri, who appeared on Dragons' Den and is running the event, is still planning on going ahead with the show, despite the vast numbers of people who have now signed the petition.

In an interview with the BBC, he said he understands that some people might find the concept of the show “distasteful”, but he doesn’t think that should be grounds for “censoring a true story that happened in Britain”.