TV documentary series 'The Specials' is all about what unites us, not difference. 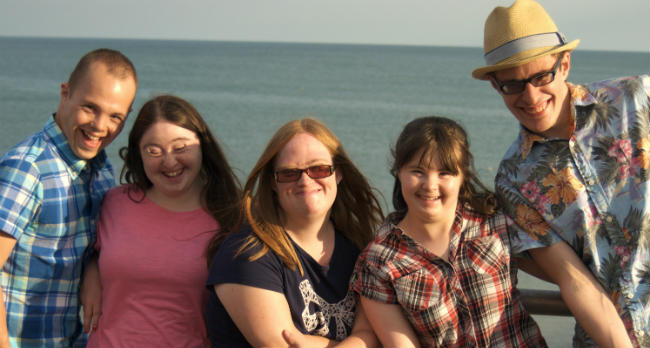 “This is our world and we want to share it with you” - this invitation is made to the viewer by Sam, a 22 year old with Down's Syndrome, at the very beginning of “The Specials”.

For the unitiated, “The Specials” is an award-winning documentary series following the lives of 5 friends with intellectual disabilties who share a house in Brighton.

Since it launched online in 2009, the guys have shared everything with their audience: from major life changes such as leaving home for the first time or falling in love, to the everyday routine of queuing for the shower or going to work — all with a serious amount of partying thrown in!

How rare is it for people with an intellectual disability to have the chance to share their day-to-day lives in this way? How often do you see someone in a programme or film in which their disability is incidental to the storyline?

I would argue that you only really encounter this in fictional representations of people with intellectual disabilities – such as in dramas and films. By contrast, when it comes to documentaries, a medium through which we share and discuss the reality of our existence, disability is always placed front and centre and often approached as a subject over which you must either fret or coo.

At one end of the scale, this is done necessarily, through vital investigations such as Sally Phillips' “A World Without Down's Syndrome” raising awareness of the impending impact of NIPT (non-invasive pre-natal testing).

At the other extreme, one encounters the “heartwarming journey” genre in which we typically follow someone with an intellectual disability as they undergo a transformative experience – such as with “The Undateables” the hugely popular show in which people find love with the help of a dating agency or the brilliant “Growing Up Down's” in which actors with Down's Syndrome put on a production of Hamlet.

So it seems in documentaries we have a choice between serious investigation or uplifting adventure. While vastly different in tone, both share the same drawback. They separate the person with an intellectual disability from the rest of the population, portraying them either as victim or inspiration.

Even when the person with the intellectual disability is portrayed as being hugely likeable this is still problematic: their 'cuteness' an over simplification, often hiding the more complex and complete person within. Surely a better aim would be to help the general public relate to people with intellectual disabilities as multi-faceted human beings? This is what we have tried to do with “The Specials”.

So in Season One, Sam shares with the viewer his anguish at being a single man and we follow him through the pain of unrequited love, so we see the joy of a raucous karaoke night out, or the bickering tension of an argument over washing-up powder during the weekly shop. So we also see the power of friendship as the housemates share each other's up and downs, giving advice on matters of the heart or rallying round when Lucy's parents decide to divorce.

“The Specials” is at once entertaining, funny, sad and heartbreaking and can make for a challenging watch. Some have criticised our show for being too brutal at times such as with Sam's confusion at the gender of the Ladyboys of Bangkok or Hilly's dramatic break-up in Season 2 but we feel these scenes are important.

So here's to a future in which more people with an intellectual disability get to share their sometimes humdrum, sometimes difficult, sometimes extraordinary lives on film. Lives at their core, just like any other. If that happens then maybe, just maybe, the mainstream viewer will fully relate to this community and true inclusion will follow.

Katy Lock is producer of The Specials. Subscribe to watch Season 1 & 2 and to receive lots of educational content in the Xtra Special Zone at https://www.the-specials.com