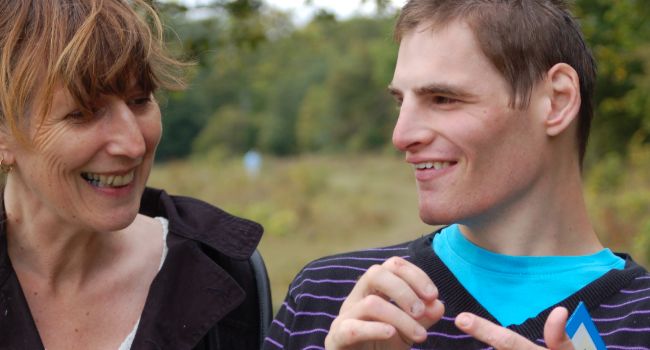 It’s a question that families and support workers caring for those with severe learning disabilities and "challenging behaviours" face every day. Where shall we go and what do we do if we need to bail out quickly?

Those with a history of "challenging behaviours" have “just as much right as anybody else”  to enjoy community activities.

But for chief executive of the Challenging Behaviour Foundation (CBF) Vivien Cooper, the fear of what might go wrong can become a major obstacle to enriching the lives of those who can ill afford to have opportunities further restricted.

Cooper uses a video of her severely learning disabled son Daniel, 33, in a coffee shop with support workers to help train new staff on how best to manage him in community settings.

For her, meticulous preparation is the appropriate response to challenges rather than narrowing down options. “Daniel finds crowds very difficult, but he still does go to places where there are lots of people", says Cooper. "We just manage it quite carefully. So if he goes somewhere where there’s a lot of people, we don’t head into the centre of a big crowd; we think about being at the edges. We think about how we can get out quickly.”

An alternative to a punitive approach

Cooper, from Gillingham, said keeping her son, who has two-to-one support, at home in his supported living property is more difficult than going out.

“For most people who display "difficult behaviours", if you find an activity they enjoy those behaviours diminish,” she said.

Cooper says it’s not unusual for families supported by the CBF to say activities have been dropped because of earlier incidents, and she says it’s not just staff working in the community who cancel activities, but also those in hospitals. “We have families where they’re reporting that, for example, a home visit (out of the hospital) might be cancelled, or a visit from a family member because it’s perceived that there’s been difficult behaviour. It happens fairly regularly I would say.”

However, Cooper insists support workers must be given the training they need to feel confident about going out. She added that support workers can often find themselves blamed if a trip backfires. Blame culture in care firms may leave some lacking confidence to venture out.

Last year, Martin Boniface’s son Harry - who has severe epilepsy and profound and multiple learning disabilities - was forced to leave a theatre after an audience member complained about the noises he was making. Boniface says he was told the woman had been consistently turning round and “shushing” Harry before telling the support worker they should leave.

Before leaving with Harry after 90 minutes, the support worker told the woman the noises were Harry’s way of understanding the show.

The theatre incident in April happened around the same time as Tamsin Parker, who has Asperger syndrome, was dragged out of a cinema in London’s South Bank after laughing loudly.

Cooper insists that some behaviour should not be viewed as a condition, but analysed to better understand its function: “If a person’s behaviour is challenging because of an underlying, unmet health need for example, let’s say they’re in pain — whatever you do until you address the pain issue that behaviour is going to continue to occur.”

Peter McGill, a learning disability psychologist at Kent University, said sometimes it’s “entirely appropriate” to assess risks attached to someone’s behaviour in the community. He added that those with a history of "challenging behaviours" have “just as much right as anybody else”  to enjoy community activities.

“Sometimes, the reasons that they don’t take part in those activities are to do with staff or carers sometimes being scared of what might happen, sometimes not really understanding the behaviour and why it happens and not being able to adequately prevent it,” he said.

Often those with the “least training and the least understanding get put in the most difficult situations”, said McGill. "Challenging behaviours" should not “be used as an excuse” to deny people opportunities, said the academic.

McGill, who is the acting director of the university’s Tizard Centre for learning disability and community care,  said it’s “entirely legitimate” for families to challenge those who close down options. “They (families) will often have their own experience of taking the person into leisure activities or shopping and being able to successfully manage any behaviours that arise, or prevent any behaviours from arising in the first place.”

Families often have to insist their loved ones get the quality of support they need, he says. Narrowing down options for a vulnerable adult whose opportunities may already be restricted can be “significantly damaging”.

McGill added: “You’ve got people who have a restricted range of activities that they can engage in anyway. They’re usually, or often, very reliant on staff or carers to provide the support necessary to take part in those activities. It’s not that they can just go off and do things themselves. So the impact is certainly significant in terms of quality of life.”

Whilst "challenging behaviour" can’t always be prevented, it’s crucial to “make sure that despite the behaviour that they sometimes display, they get access to the best quality of life that they can”, McGill says.

Care sector umbrella bodies Learning Disability Voices and Voluntary Organisations Disability Groups were both approached for comment, but neither responded.