As a mother of a 10-year-old boy with a profound and multiple learning disability from an unknown genetic cause, the arrival of the English Learning Disabilities Mortality Review (LeDeR) in my inbox is always a heart sink moment.

I try to look for the positive, some good news that suggests that the tide is turning and there are indications that the healthcare of people with a learning disability is improving.

Yet, it was still a shock to read that people with a learning disability are dying 25 years younger than the general population and are three times more likely to die avoidably.

Although the report did state that there is an encouraging picture of an overall reduction in the proportion of preventable, treatable and overall avoidable medical causes of death from 2018 to 2020, it highlighted that there are also indications that such improvements are not felt across all aspects of service provision.

In fact, reviewers found that in 42% of deaths, a person's care had not met good practice standards.

So, after decades of reports, inquiries and recommendations, when is the talking going to stop and we actually see some effective changes?

What are preventable deaths?

Avoidable mortality is all causes of deaths and all those defined as preventable or treatable. 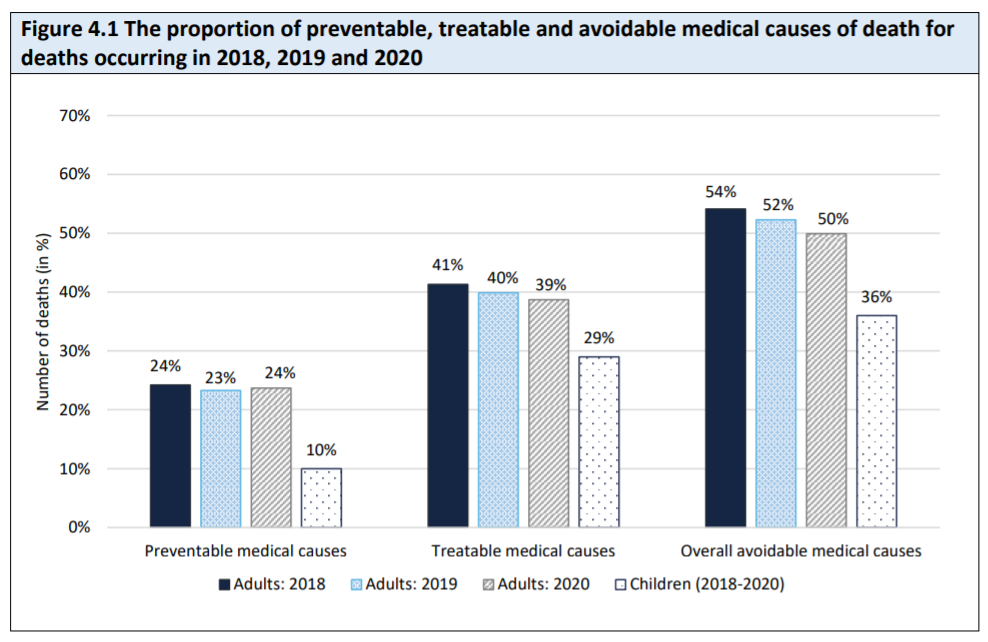 Adults and children from Black/African/Caribbean/Black British ethnic groups, and mixed/multiple ethnicities had a higher proportion of treatable medical causes of death (44% and 43% respectively) than people from other ethnic groups.

The most frequently recorded types of treatable medical causes of deaths among adults were bacterial pneumonia, ischaemic heart disease and epilepsy. In children, epilepsy was the most frequently recorded treatable medical cause of death, followed by bacterial pneumonia and acute lower respiratory infections. 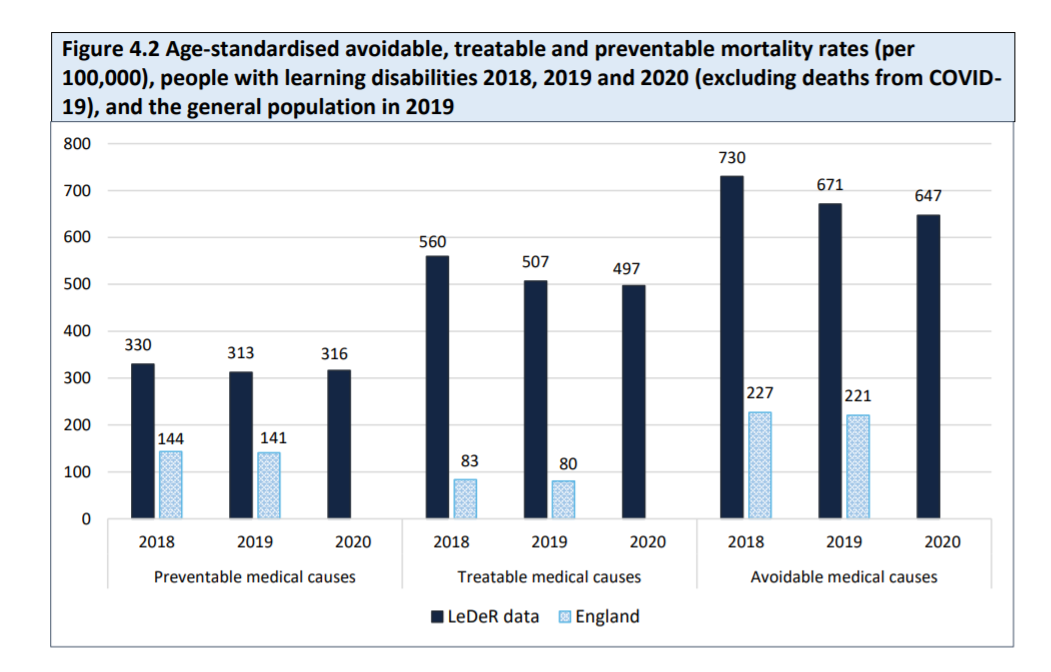 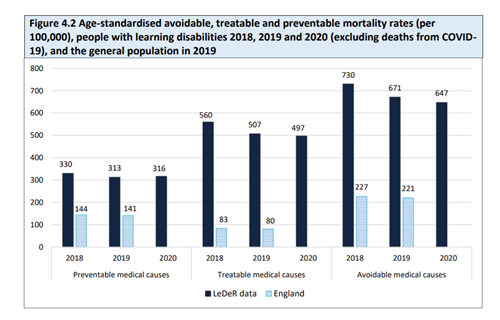 The same contributory factors outlined in reports dating as far back as 2007 are flagged up in the latest LeDer data and include problematic or unsafe hospital discharges, diagnostic over-shadowing, incomplete learning disability registers held by GPs, and lack of application of the Mental Capacity Act.

It also highlighted the patchy provision of specialist learning disability liaison nurses in hospitals, families not feeling listened to or their concerns acted upon, and lack of consideration of the need for ‘reasonable adjustments’ to existing policies and processes for people with learning disabilities.

Other variables impacting on preventable deaths identified by the report were:

What can be done to prevent more avoidable deaths?

Widespread use of the 2019 NHS England and NHS Improvement improvement tool Reducing deaths of people with a learning disability in NHS acute (hospital) trusts in England could help. The aim of the tool is to help NHS acute (hospital) trusts evaluate and understand the capability of their systems and structures to reduce premature mortality of people with a learning disability in their care, and to make improvements where needed.

Diagnostic overshadowing also plays a vast role in delaying treatment. Although the majority of my son's healthcare has been excellent, we have experienced this many times. The most dangerous was when head banging was dismissed as behavioural before hypoglycaemia (low blood sugar) from cortisol deficiency was eventually diagnosed.

A recent British Medical Journal (BMJ) article said that examination, investigations, and treatment can also be hindered if health professionals have a poor understanding of mental capacity; for example, misunderstanding an anxious person with a learning disability’s reluctance to cooperate as a valid refusal to consent.

The article also called for action at the individual level. It said that healthcare professionals each know what they ought to do to improve healthcare for people with a learning disability, but they're not always doing it.

It added: "To understand why not, we need to reflect on our own unconscious bias: is our background, personal experience, or learnt societal stereotypes impacting on our actions and decisions about people with a learning disability without us realising?"

Recommendations from LeDer to address this include:

The pandemic has exposed and amplified underlying health inequalities in society and tackling the causes is even more urgent now. As the UK recovers from the health and economic impact of the pandemic, experts believe that if these things are not finally addressed, the same people will face many more years of inequality.

There is both a moral and economic case for tackling health inequalities in the care of people with a learning disability. As well as the impact on vulnerable patients, health inequality also places a considerable burden on our health service. One study put the cost of socioeconomic inequality for the NHS at £4.8 billion a year. 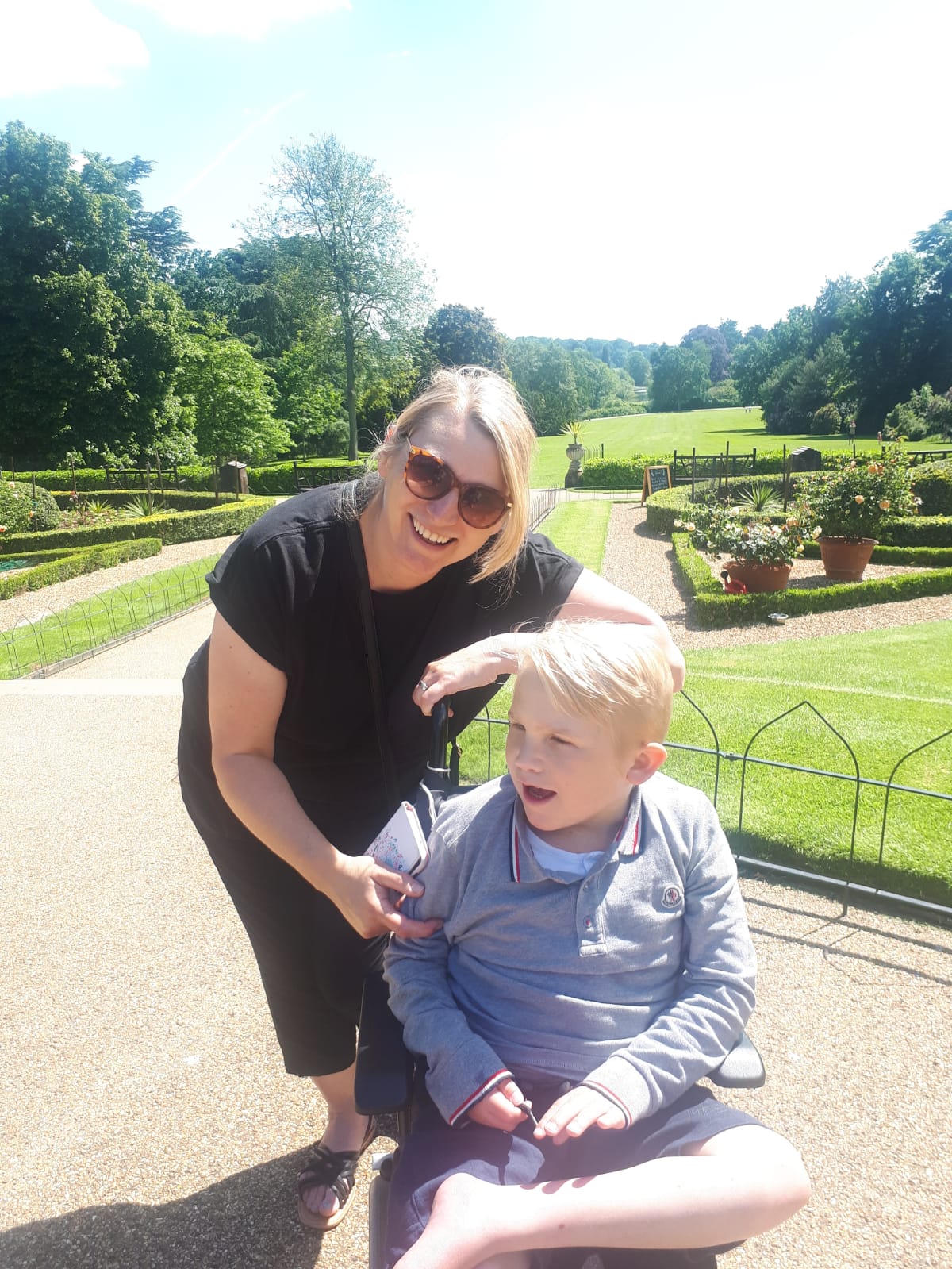 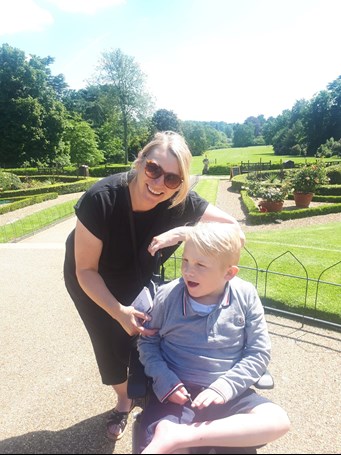 Me and my son Gabriel, who deserves better!