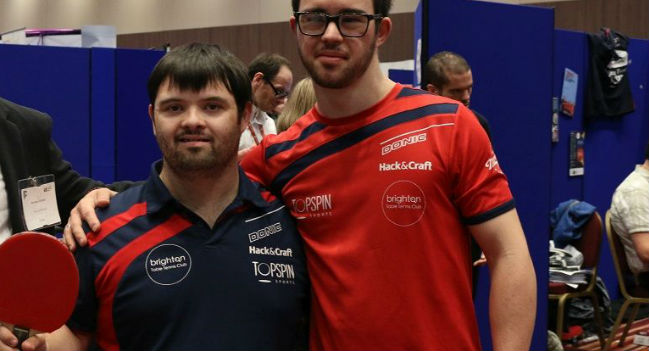 When it comes to activities for people with learning disabilities, Brighton certainly has a lot on offer. The city is well known for its inclusive and liberal attitude. So it should come as no surprise that their table tennis club provides sessions for refugees, those affected by cancer and people with learning disabilities. It has even received a visit from Jeremy Corbyn, who described the club as a “place of opportunity”.

Based in Brighton’s bohemian and vibrant Kemptown, the club offers up the motto “Community. Respect. Solidarity. Competition.” The graffiti-decorated venue is reminiscent of a 1990s school youth wing. The setting is welcoming and its a place that offers genuinely exciting opportunities for people with learning difficulties.

I caught up with Brighton Table Tennis Club Founder and Director Tim Holtam, to find out more. I began by asking how it all started.

“The club was nearly six years old when we launched our very first Friday evening session in December 2013," says Tim. The club had received funding from Sport England to run the Sussex Sports-4-All three year multi sport project. "The eight players that came to the very first session are all still involved with the club today."

"Since then, it has been an amazing four years, with exchange programmes with physically disabled players from Malmo and a wheelchair table tennis club in Berlin. We’ve also met hundreds of other physical and learning disabled players and champions from across Europe. The Sports Union of Down’s Syndrome World Championships in Portugal 2017 was a particular highlight and will feature in a film soon to be released about the squads of Brighton Table Tennis Club & Team GB's 'T21' team”.

Harry Fairchild won gold in the men’s doubles in Portugal. He is now a coach. Tim says Harry is the first table tennis coach anywhere with Down's Syndrome. It's something the club are very proud of.

“Harry has taught Makaton (language skills) at local primary schools for years," says Tim. "He is a born teacher. I remember asking Harry's parents and Table Tennis England, who all said they would support it."

"I had no idea that the international interest in him getting his Level 1 coaching qualification would be so big. It was powerful and it’s amazing every day to see Harry  - and now Chris and Andrew, two recently qualified coaches with T21 - working with and coaching people of all ages. They contribute so much back to the BTTC community. Everyone gets so much out of that. The club have shown that others can also be coaches. Harry is a one-off in so many ways but his coaching qualification really paved the way for us to work with others with T21 like Chris and Andrew.”

“I have a cousin of a similar age to me with T21 but only see him a few times a year as he lives in Nottingham. As a teacher at Patcham High School I had worked with a wide range of students with learning disabilities. What the Table Tennis Club has, that is different to a school, is the depth of relationships feel stronger. I moved to Bristol with my wife intending to stay there, but on my 30th birthday in 2014, I missed everyone from Brighton Table Tennis Club (especially Harry) so much that I persuaded my wife to move back to Brighton just two months later! We’ve had a baby this year and Harry is her god-father.”

"What would you say people with learning disabilities (or in fact anyone) can get out of playing table tennis?" I ask.

“The club offers a support network: friendships across social and cultural barriers."

"The monthly T21 sessions, with all of the new and younger players being coached by the T21 coaches and role models, creates an unbelievable atmosphere at the club. You can see in some of the parents’ faces how great they think it is."

"We are in the process of putting a manual together to share what Brighton Table Tennis Club does well. We've also featured in a TedX Talk and the film I mentioned previously will feature at Sheffield Film Festival in the coming months. We are all rather excited about where this will take the club."

From ping pong to pottery...

Another fantastic institution based in Brighton (Hove, actually), is Grace Eyre. It offers a wealth of activities for adults with learning disabilities from pottery to film-making. The schedule, much like those taking part, is diverse.

Grace Eyre employs its service users. The reception is staffed by two conscientious women who remember my name when I leave an hour or so later. The inclusivity makes for a great atmosphere. The cafe area is empty today, but I have visited before when the place is buzzing and full of adults with learning disabilities, keen to know who I am and what I am doing there. This day centre based  is also home to the Purple Playhouse. I spoke with Mark Richardson, who has been running drama and theatre projects together with people with learning disabilities for over 30 years and is now the ‘Our Voices Manager’.

'All performers are drawn to drama for the experience'

“The Purple Playhouse is a community theatre and venue which has been running for over four years. Much of the work is put on by people with learning disabilities, but it is also a Brighton Fringe venue and venue for hire that houses all kinds of productions and events. It’s a source of income for Grace Eyre and a great way to raise the charity’s profile and what they do.”

"My focus is on our drama project ‘Grace Eyre Street’ and regular club night ‘Purple Club House’. Grace Eyre Street is a drama project that works towards an end goal: a performance in May for Brighton’s Fringe Festival. Anyone with a learning disability can join, but it isn’t a drop-in group. We recruit performers in September and rehearsals for the Fringe show commence in January. Those taking part devise their own show, make decisions, take direction and work together."

"The Purple Club House runs on the third Friday of every month. I would describe it as a ‘laid back club’. Our downstairs cafe becomes a bar and cinema. We serve alcohol and snacks. It’s a great place to meet friends, make friends and take part in a picture quiz. Upstairs we have DJs (with learning disabilities) and sometimes live music.”

I ask what contributors get out of attending. “For our performance groups it's the experience," says Mark. "All performers work for the experience. We use a circle based approach which results in an increase in confidence and an ability to advocate for themselves. A great example involves a man who attended Grace Eyre Street last year. He doesn’t use speech to communicate, but this year he has been speaking on stage. It’s fantastic to see such a positive development from our group."

Get involved with Grace Eyre Street and theatre projects