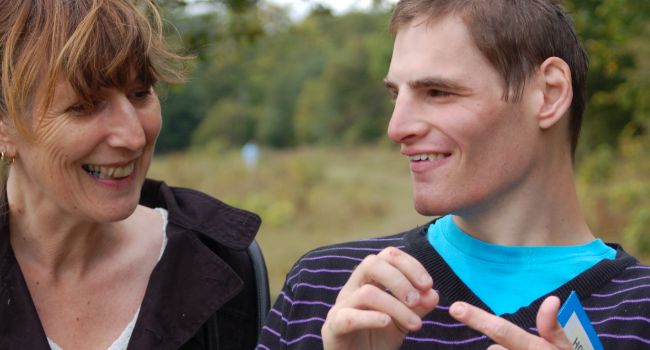 When Beth Morrison’s learning disabled son returned home from school with unexplained bruising, her anger would see her become not only a defiant voice for her own 11-year-old, but all of Scotland’s disabled children.

“Our children have the same rights as all children to be safe, happy and supported by people with the skills and values to help them thrive".

Since that day in 2010, Morrison’s relentless campaigning has seen her set up her own positive behaviour support charity and persuade the Scottish government to issue guidance to schools on restraint.

Research into the use of restraint and seclusion

Through the charity Positive and Active Behaviour Support Scotland (PABSS), Morrison is determined to go on shining a light on an issue she feels was left hidden from view for far too long.

In England, she is joined in her efforts by the Challenging Behaviour Foundation (CBF). Whilst Morrison’s campaigning saw Scotland introduce guidance, the CBF maintains that the restraint of disabled children in England’s schools remains unregulated, with no Department for Education (DfE) guidance or figures kept on the extent of its use.

The survey found 71% believed their children had experienced seclusion, with 21% saying this happens daily. Most families said the restraint and seclusion goes on in school and that the physical and emotional impacts are significant.

Up to 58% of families said their child had suffered restraint injuries and 91% reported a negative emotional impact.

But families maintain incidents often go unrecorded, with just 19% documented. The research found that many families believe restrictive practices are the main method for managing behaviour in some schools.

CBF chief executive Vivien Cooper, whose 33-year-old son Daniel has a severe learning disability, said “it is unacceptable that children are being physically injured and traumatised and this needs to stop. The information shared by families in our survey and the case studies is shocking.”

Cooper, from Gillingham, says whilst the spotlight has focused heavily on restraint and seclusion in hospitals, the same practices in other settings have been overlooked.

As part of the transforming care agenda to get adults with learning disabilities and autism out of hospitals, NHS Digital published statistics in January detailing the use of restraint and seclusion in inpatient units.

Cooper said: “The DfE in England has been promising long-overdue guidance for schools on this issue for four years now. The government must take this issue seriously across the whole of the UK, take steps to understand the scale of the problem, invest in positive behaviour support training for staff, trauma support for families, and improve accountability at all levels.”

Morrison, whose learning disabled son returned home from school with unexplained bruising, wants the Scottish government to implement the recommendations of a recent report on restraint and seclusion in schools by the country’s children’s commissioner Bruce Adamson. Submitted to the Scottish Parliament last December, the commissioner’s report recommended councils record all incidents of restraint and seclusion in schools on a standardised national form. Adamson’s report, 'No Safe Place: Restraint and Seclusion in Scotland’s Schools', also suggested anonymised data on seclusion and restraint should be reported to the Scottish Government’s Children and Families Directorate.

On seclusion, the report recommended that national guidance should distinguish between using a supervised, separate space and leaving a child in a room alone unable to get an immediate response to distress.

Damage to property should only be a justification for the use of restraint or seclusion when it presents an immediate risk of harm to the child or someone else, said Adamson. Education Scotland and the country’s Care Inspectorate should scrutinise the use of restraint and seclusion in schools as part of their inspection regimes, the report argued.

Morrison, from Monifieth, in Angus, said the survey findings produced by the CBF and PABSS add to the “evidence about the experiences disabled children suffer at the hands of those paid to care for them”. The campaigner, whose now 20-year-old son has epilepsy, cerebral palsy, learning disabilities, and autism, says that “it should be the start of real action to end this appalling treatment of vulnerable children”.

“Our children have the same rights as all children to be safe, happy and supported by people with the skills and values to help them thrive,” she added.

Though not targeted specifically at children with disabilities, the DfE issued guidance in 2013 titled the “Use of reasonable force” aimed at head teachers, staff, and governing bodies. The guidance maintains force can be used “to prevent pupils from hurting themselves or others, from damaging property, or from causing disorder”.

A spokesperson for the DfE said schools need to be “safe and calm environments with effective behaviour management” that meet the needs of all pupils - including those with mental health difficulties and special educational needs or disabilities. The spokesperson added: “We trust schools to use their judgement in recording incidents involving force and schools should also consider whether additional training for staff is needed.

“When serious incidents occur, we would expect schools to record the incident and let the parents know.”

The DfE says they recently invested £10m “to help schools share best practice and knowledge in order to support good behaviour in schools”.

A Scottish Government spokesperson insisted they are committed to ensuring the wellbeing of all children and young people, with each council responsible for the care, safety and welfare of pupils in school. The spokesperson added: “National guidance is clear that physical intervention, physical restraint and supported isolation should only ever be used as a last resort, when in the best interests of the child and never for disciplinary purposes.

“Every intervention should be carefully monitored and reviewed. We are fully considering the recommendations in the children’s commissioner’s report.”

*The CBF and PABSS survey research was based on 204 respondents and 566 case studies.

Caption: Beth Morrison, chief executive of PABSS, who believes the ongoing use of seclusion and restraint in school is “appalling”.

Caption: CBF chief executive Vivien Cooper with son Daniel. Cooper has called on the DfE to issue guidance on the use of seclusion and restraint in schools for children with disabilities.