Interview: Rosa Monckton suffered a backlash when she made the case for people with learning disabilities to be exempted from minimum wage protection, in order to create more job openings. Learning Disability Today visited the learning disability training centre she’s set up, to explore the debate around employment challenges. 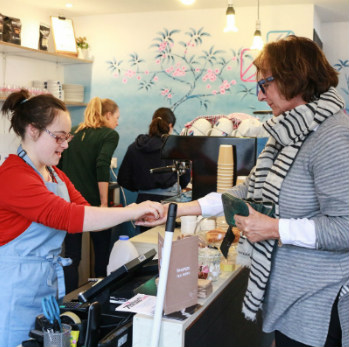 Businesswoman and charity-founder Rosa Monckton starkly divided opinion when she made the case for people with learning disabilities to be exempted from minimum wage protection. Her argument, first published in The Spectator earlier this year, was that it would create more job openings for a group wrestling unemployment rates of 94 percent.

Many came to hear of the social enterprise founder’s proposal second-hand, through follow-up reaction pieces penned by other writers – of which there were many – or social media posts. She was speaking as the mother of a child with learning disabilities soon to reach workable age. She was speaking, also, as the founder of a popular new training centre that has achieved early success in delivering employment pathways for young people with learning disabilities. Whether this context was considered or lost, it spared her little criticism.

“There was a furore,” Rosa recalls. “The most negative reactions said I was devaluing people, but I’m not valuing people in terms of money. [Work gives you] self-worth… that reason to be somewhere, to be involved in something. You cannot put [any] financial value on a human being. That’s where the argument lost its way.”

“I do think the minimum wage has become too high,” Rosa maintains. “Therapeutic exemptions exist already in law. If you’re a ‘piece worker’ and you get paid by the hour and your output is slower than everyone else’s then you’re allowed to be paid less under the law, so I’m not asking for anything different.”

"You cannot put [any] financial value on a human being. That’s where the argument lost its way.”

Although Rosa doesn’t discuss her daughter directly, the inference is that she desperately wants her and people like her not to become part of the aforementioned 94%, but to experience the sense of accomplishment that comes from working. It's a very human instinct.

Learning Disability Today asks about the role volunteering can play in fostering a sense of fulfilment. “Legally, you can’t volunteer for very long. I don’t know enough about it but I know that’s an issue because you’re then accused of exploitation. Whichever way you look, you’re accused of being exploitative.”

“Among the most interesting emails I had, one man said ‘I employ 12,000 people and I would like to employ 250 people with learning disabilities as my moral conscience says that’s what I should do, but we’re not a charity and my shareholders wouldn’t let me do it’. Others were from parents saying ‘you’re absolutely right, my son/daughter is 50 and still sitting here at home. I’m nearly 90. He’s capable of doing things but no-one’s going to pay him’.”

Rosa is disarmingly frank, particularly when she reflects on the moral criticism she received from people with physical disabilities, often similarly susceptible to discrimination as those with learning disabilities.

Writing in The Independent, wheelchair user Jim Moore asked: “If you legitimise wage discrimination against them, how long before you legitimise it against people with physical disabilities, like me?”

All of which brings us back to the candidates themselves, the cohort of 30-odd young people with a range of learning disabilities supported at Team Domenica HQ, spread across three floors.

We’re speaking in the café on the ground floor, which is the service’s hub. People with a range of abilities from Down’s to Dyspraxia are serving at the counter, cooking, taking part in customer service related workshops (not lecture-based), or enjoying "enrichment activities" like table tennis.

A by-product of a training model that focuses on instilling customer-facing skills – which is a priority for Team Domenica – is that it serves to “educate the public” at the same time, says Rosa, awarded an MBE last week. People with learning disabilities have a spectrum of abilities but the common challenge they all face is “other people’s prejudice.”

“It’s prejudice borne of ignorance and its ignorance borne of fear. A café is good because it breaks down those barriers of fear. It’s fear of the unknown. People are frightened. ‘How will I behave?’ Will they ‘understand me?’ I think it’s really important to break down the barriers.”

Four trainees have advanced from the café to paid work thus far; two are working at local Co-op supermarkets, one is serving food at Brighton Pier and one has been employed as a pastry chef at Sussex University.

“We get to know our candidates very well; we see what they’re capable of, what’d they like to do, train them up and then go and match them to the most appropriate business. We have a completely holistic approach. Our whole aim is about getting young people with learning disabilities work.”

Learning Disability Today discusses with the trainees what expectations they had before enrolling with Team Domenica.

Ewan, who has had hemiplegia and other neurological conditions from birth, says: “There was a piece on the news saying Team Domenica was opening and I thought 'wow, it would be good to get a job in the workplace'.” Although he had had a flavour of work through other work experience placements, it seems to be the thought of working at all that excites him, not money or what he would do with it.

Ewan talks about working on the doughnut stall at Brighton Pier. “I managed to get loads of service experience there, which was good.” We ask, “how important is getting paid?” There is a pause for a long time before the question comes back, “how important is what?”

Some people of course have different capacities, different housing situations, and different goals. Ben, who has Down’s and currently lives with his mum, says he wants to live independently with some friends who also attend Team Domenica. “I would like to have my own house with my friends, but I need more help. Having a job would help with money.”

The 22-year-old adds that he “would like to get a job in another café, working behind the till.” Ben admits his dream job would be to act, saying he “loves” drama.

A pervading lack of confidence means aspirations are rare when candidates first join, Rosa says, with most candidates having been encouraged to attend by their families.  The café-model has been well received as valuable and appropriate for many young people with learning disabilities. It is supported by the local council, parents, the students and is expanding in September due to demand.  The jury remains out on the question of minimum wage exemptions, but the conversation will continue.

Find out more about Team Domenica