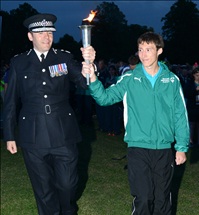 In attendance at Wednesday's ceremony with PCC Sue Mountstevens, he joined tennis player Thomas Mellor in lighting the Olympic cauldron, as well as meeting many of the games’ 1,700 athletes.

Speaking of the event, CC Gargan said: "It was a great thrill to be invited and to have the opportunity to meet so many marvellous athletes who have shown such dedication and commitment to earn a place in the games.”

Sue Mountstevens said: "I had a truly wonderful evening at the Special Olympics opening ceremony. It was a real privilege to have been invited, let alone assist in lighting the cauldron.

"The atmosphere was electric, with hundreds of athletes enjoying themselves with their friends and families. There was a real sense of pride throughout Bath as everyone came together to make it such a fantastic event."

The Special Olympics GB National Games is held every four years, and is the largest sports event for athletes with intellectual disabilities. This year sees the ninth series of the games, and will feature athletes from England, Scotland and Wales competing in 12 sports

The Games, which began yesterday [28 Aug], will continue at locations around the force area until Saturday.