Supporters say animal-assisted intervention for autism bolsters social skills and provides unconditional companionship. But what does scientific research reveal about the value of spending time with a furry friend? 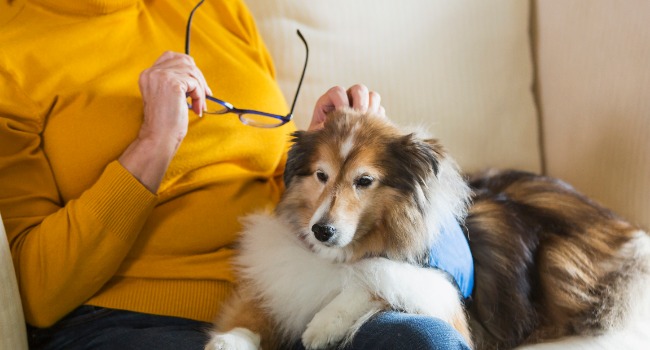 Animals have always been there for Natasha Sheldon-Lane. While humans have often let down the 29-year-old mum of two, animals have been her rock.

When other children were playing with Buzz Lightyear or Spice Girls dolls she was pushing her pet dog Susie, a Jack Russel, around in a pram. She now owns a Dogue de Bordeaux, Lola, three cats, Bob, Mittens, and Tink, and two rabbits, Albert and Snowball.

A “life enhancer, a wellbeing booster, a true autism hero".

Sheldon-Lane, from Flint, in North Wales, said: “Since I’ve been, well, as big as I can remember I have always preferred animals and being in the house with an animal, whether it be a hamster or a dog, to having friends and people and going out. I have always just been with animals".

After a troubled school life Sheldon-Lane was diagnosed with autism and attention deficit hyperactivity disorder (ADHD) following the birth of her 10-year-old son Dainton. When her son was a baby she struggled to interpret his needs — professionals initially thought this was postnatal depression but concluded she had autism and ADHD.

She added: “You’re getting no judgement with animals.”

Sheldon-Lane, whose seven-year-old daughter Harmony is also being assessed for ADHD and autism, said friends and partners will make demands that she can struggle to deal with when she needs time on her own for “social recovery”.

“And you always have to give an explanation to people for absolutely everything, but you don’t have to do that with your dog or your animal".

Researchers have carried out numerous studies attempting to quantify or analyse how far people with autism can benefit from interacting with animals.

Led by professor Maggie O’Haire, of Purdue University College of Veterinary Medicine, in Indiana, a 2017 review of research from 28 studies showed the most commonly reported outcome was better social skills. O’Haire’s review, published in Applied Developmental Science, concluded that this finding was “unanimously significant across 22 studies”.

She said animal-assisted intervention (AAI) programmes generally involved 10 hours of contact over eight to 12 weeks. And though the methods used for the studies reviewed by O’Haire were “limited in many cases”, they have “improved over the last few years”, she concluded.

Horses are the most commonly researched species, followed by dogs. But further work is needed to identify the best circumstances for change and people who don’t benefit from the intervention.

Additionally, O’Haire said she wants to see “high quality studies” to move AAI from an “enrichment activity to an evidence-based practice for autism”.

Social isolation blights the lives of many people with autism — research by the National Autistic Society in 2018 showed they are four times more likely to be lonely. Up to 79% feel socially isolated, the research showed. Animals can act as a buffer against this isolation.

Sheldon-Lane believes there’s an argument for allowing autistic people to go into shops and restaurants with their pets, and not just those with trained assistance dogs. She said: “If I could take my dog to places with me then I would be able to be a lot more sociable than I am because I find confidence in my dog.

“Before I had my dog I didn’t leave my house, unless I was in my car. I’d go and pick my mum up and go to where I needed to go and I’d always have my mum,” she added.

Kiley told of how one young woman, Lucy, struggled to leave her university bedroom and had to have lectures recorded and sent to her before she was given cavapoochon Peanut by the charity.

She said: “Now she’s got Peanut she can go out — she goes to lectures — everybody knows who she is and accepts her".

“Peanut lives with her in her room at uni and goes to all the lectures with her,” added Kiley.

While living with a trainer puppies from Dogs for Autism are allocated to new families. Once a week the trainer will visit the family with the puppy to help them get to know the dog. The charity uses labradors, labrador-retriever crosses or small dogs like the cavalier cross.

Some people may find it easier to use public transport with smaller dogs, while labradors and labrador-retriever crosses can use their size to prevent children running off into dangerous situations. The child is connected to the dog’s harness though a belt while the adult holds the lead. If the child tries to bolt the dog is trained to stand still.

Dogs for Autism chief executive Hilary Armour set up the charity after seeing how her own son Marcus, 13, benefited from being with their labrador Yogi. Armour was a special educational needs teacher and dog trainer who worked with Yogi herself.

The animals are also trained to provide deep pressure therapy, with the dog lying on the child. The dogs can also alert family members to the onset of a changing mood and de-escalate anxieties and challenging behaviours.

Kiley said Yogi will alert Armour to a change in Marcus’ mood by refusing to obey commands up to 10-minutes before the onset of a meltdown. It helps all the family - Marcus in particular - avoid massively stressful situations.

The charity relies on donations with each animal costing £20,000 to train.

Lucy’s mum Julia said Peanut has given her daughter  “something to live for” and he has proved to be a “life enhancer, a wellbeing booster, a true autism hero".