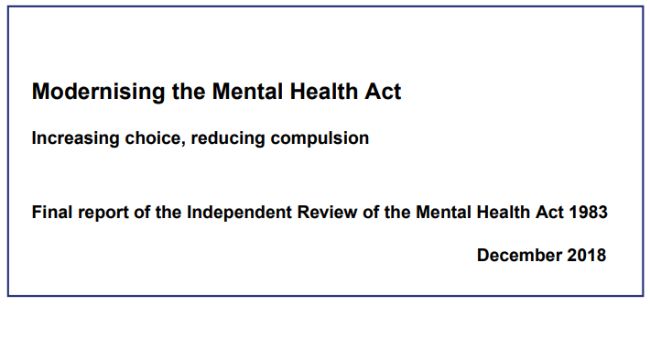 The Independent Review of the Mental Health Act was published last week and recommended welcome and far reaching proposals to improve mental health care in England and Wales.

"Autism is not a mental health condition and it is inappropriate for autism to be included in the definition in this way".

But, we believe the review could and should have gone further.

Last year the Prime Minister announced an independent review of the Mental Health Act 1983 and appointed Professor Simon Wessely to lead this. We and many other organisations and campaigners welcomed this move and the opportunity it offered to make sure the Act better reflects the needs of autistic people.

Following many months of consultation, which our charity fed into, the review’s report was published last week. The Government is currently considering the recommendations and is set to issue a formal response in the New Year, before introducing a new Mental Health Bill.

We need this Bill to fix the broken mental health system for autistic people.

What the review means for autistic people

The review recommends a number of very welcome changes which would strengthen people's right to challenge detention and help make sure the right preventative and crisis services are available in communities. These include:

These recommendations could make a real difference, and are things that we and our supporters have been calling for. But we're really disappointed they don’t include removing autism from the Act's definition of 'mental disorder'. We are clear about this: autism is not a mental health condition and it is inappropriate for autism to be included in the definition in this way.

Because autism is part of the definition, autistic people can be detained in a mental health hospital, even if they don’t have an accompanying mental health condition. And this can happen simply as a result of there not being enough community-based to meet autistic people’s needs in the time of crisis. The review itself admits as much, acknowledging that detention can often be “the only relief available for those experiencing a crisis because there is no alternative option available to support them.”

This is not good enough. We should not be allowing people’s human right to liberty to be overridden because of a lack of services. We believe this is, quite simply, discriminatory and has to change.

There’s no denying that this is a complex issue – and there are concerns that getting it wrong could mean that some autistic people might end up in the criminal justice system if there was no community support and they could no longer be ‘sectioned’ to a hospital setting. The removal of autism from the definition of ‘mental disorder’ therefore must go hand in hand with making sure there are the right community-based mental health services for autistic people. The NHS has the opportunity to make this happen with its Long Term Plan, and we firmly believe that it needs to.

The review does say that the Government should keep the current definition under review. We strongly believe that the Government should finally grasp this issue and complete a review now. We’ve already waited since 2015 when they last promised to keep this under review. In fact, latest data suggests increasing numbers of autistic people are subject to detention. This cannot and must not be ignored.

To become the law, the Government needs to propose specific changes to the Mental Health Act and they would need to be voted for by Parliament. There are many recommendations in the report and we urge the Government should to adopt them.

But they must also show leadership by looking at the definition of ‘mental disorder’. We believe the Government should bring together autistic people, professionals, and organisations to decide what changes need to be made.

Tim Nicholls is Head of Policy at the National Autistic Society.

Read more about the National Autistic Society and find information and advice about autism at www.autism.org.uk