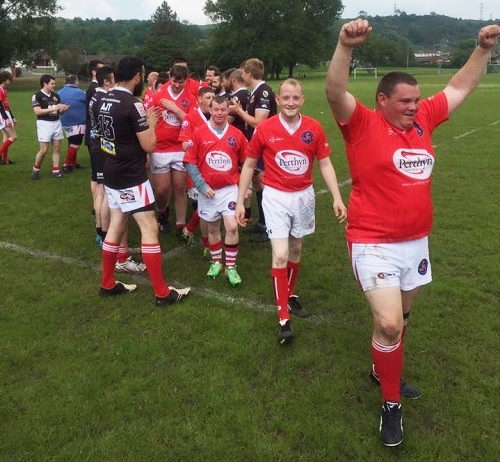 A Welsh club has been named the winners of a rugby tournament in which players both with and without learning disability took part.

The Ability Rugby International Participation Championship was contested between 21 teams from seven nations, with the Llanelli Warriors edging out Yorkshire side Bumble Bee Barbarians and local rivals Swansea Gladiators, who came third ahead of teams from Scotland, Ireland, Italy, Spain and Argentina.

The competition is unique in that it rewards participation higher than winning, and the Warriors, who played 21 times - including matches in the Mixed Ability Rugby World Tournament - were clear winners.

Warriors Captain Andrew Davies said: “It’s fantastic, it’s a great reward for all the effort the boys have put in. We’ve worked hard across the season but this has made it all worth it.”

“It’s a lot for a young team like ours to manage 21 fixtures, and we also held our annual 7s tournament,” added coach Gwilym Lewis.

“We feel we’ve set a benchmark for what integrated sides can achieve and hopefully this will encourage other teams to set up and play frequently. The Warriors are all about giving people rugby experience and this shows how well we’ve done. It wouldn’t have been possible without the support of our families and sponsors like Perthyn and Shoreline.”

The club have established a reputation as a side that wants to play, organising an extra match for themselves at the Mixed Ability Rugby World Tournament. Their triumph was a fitting way to mark their 20th season in action, which also saw them play their 250th fixture and feature on BBC Two’s Scrum V programme.

The Swansea Gladiators almost made it a one-two for the Welsh clubs, narrowly missing out to the Bumble Bees. The Gladiators are the oldest integrated club and are about embark on their 25th season.

Despite this being only the second time the championship has been held, the number of sides involved has jumped from eight to 21, which is testament to the momentum this concept is building - several other groups have expressed interest in competing when the 2016/17 season rolls around.

The competitors have found that playing rugby has a range of benefits beside the obvious ones to fitness, strength and coordination. The social aspect is all-important: social exclusion is a big issue for players with a learning disability, while for non-disabled players the chance to meet people with disabilities in a way that feels natural can often be difficult.

Rugby has a strong social tradition, with teams often mingling after games. Respect has been earned from teammates who rely on each other, from opponents who witness someone’s ability first-hand, and from the wider rugby family, which at all levels has a mutual respect for anyone taking part in such a physically demanding game.

The emphasis changes from what disability someone has, to what abilities they do have: running, jumping, passing, tackling. As a result, players have gained confidence and social skills. Their social and support network expands and they become known not as “the disabled boy”, but “the winger”, “the prop”, or even “the singer”.