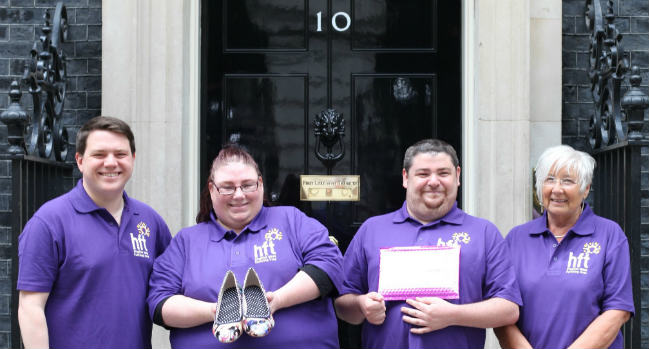 Two people with learning disabilities have helped to deliver a custom-made pair of shoes to the Prime Minister in a bid to encourage government officials to better understand what life is like for them.

Becky and Henry receive support from Hft, a national charity supporting adults with learning disabilities. They travelled to 10 Downing Street to present the gift as part of their Walk in Our Shoes campaign.

The initiative has been led by the charity’s speak-out group, Voices to be Heard, who feel that their hopes and concerns are not given the same attention by political leaders as those of people without disabilities.

The custom-made footwear has been designed using pictures of Voices to be Heard members and Hft’s signature purple and gold colours.

The special delivery follows on from a Thunderclap Appeal, which saw the charity enlisting public support to help facilitate opportunities for people with learning disabilities to share their experiences with politicians.

Social media posts were sent out simultaneously 'flash mob style' from 140 accounts to Theresa May, calling for the Prime Minister to encourage politicians to spend time with people with a learning disability in their constituency by visiting an Hft service and hearing first-hand more about the issues that matter to them.

“We wanted to capture the attention of the Prime Minister with an unusual gift that plays on her love of shoes," said Billy Davis, Hft’s Public Affairs and Policy Manager.

“Despite the learning disability sector accounting for a third of adult social care spend, the people we support feel excluded from the conversation in the political arena.

“With the impending Green Paper and parallel body of work around social care it’s timelier than ever, that the voices of people with learning disabilities are heard.

“That’s why the people we support are calling on politicians to walk in the shoes of people with learning disabilities. To spend time finding out more about the issues that matter to them with the aim of influencing long lasting, positive policy change.”

Issues ranging from public toilet access to funding cuts are amongst the concerns that members of Voices to be Heard have said they’d like to raise with their local MP.

Becky, who is chair of Voices to Be Heard, said they started the campaign because they want the issues that matter to them be heard.

“Life with learning disabilities presents challenges every day to people who are having to live with a different type of disabilities.”