This article on trauma informed care and intellectual disability is based on a talk given by Allan Skelly, consultant clinical psychologist, at Learning Disability Today’s online conference.

The definition of trauma is exposure to inescapably stressful situations that overwhelm a person’s ability to cope. There is no disagreement on what trauma is between the different types of psychological theories, but the emphasis will be different in various areas.

The diagram below (courtesy NHS Education for Scotland) sums up the different forms of trauma and how they interact with each other. 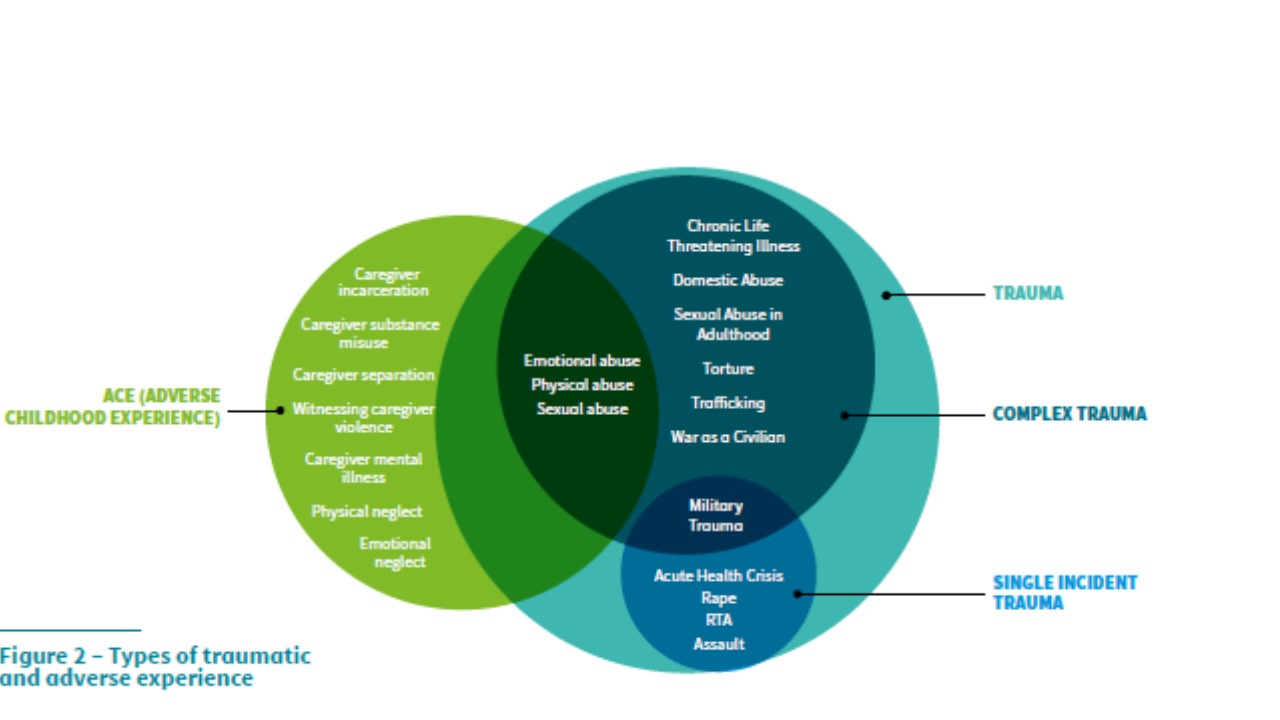 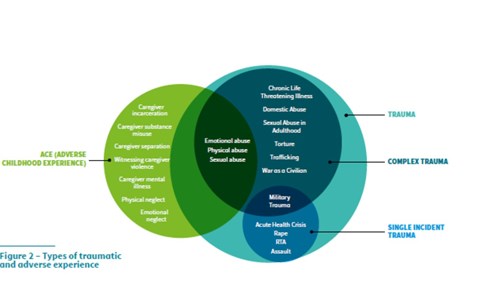 On the left is adversity, which doesn't necessarily lead to trauma and on the right is complex trauma that includes very bad neglect in early childhood. Emotional, physical and sexual abuse sits in the middle.

How much more likely is maltreatment for children with disabilities?

A study by Spencer et al  in 2005 found that children with disabling conditions seem to be at increased risk of registration for child abuse and neglect, although the pattern of registration varies with the specific disabling condition. Cerebral palsy, speech and language disorder, learning difficulties, conduct disorders, and nonconduct psychological disorders were all significantly associated with child-protection registration before adjustment, and all but cerebral palsy retained significance after adjustment for birth weight, gestational age, and socioeconomic status.

The Spencer study, which was conducted in West Sussex, is very interesting because it is about the establishment of safeguarding procedures but doesn’t grasp the everyday abuse that people in this population might have suffered such as being hit casually.

One of the theories I've come across is that parents of children with a learning disability suffer more stress which could lead to mistreatment but if you look at the rates of sexual abuse that wouldn't be affected by stress, this abuse is very high as well.

A more recent study by McDonnell et al in 2019 also found that children with autism spectrum disorder and/or learning disability are at heightened risk for maltreatment.

It is a sad story that does seem to be concurrent. For example, women with intellectual disability in relationships are much more likely to have been sexually assaulted and/or forced into unwanted sexual activity

In another study, 14% of care staff admitted to using violence against their charges and 35% claimed they have seen other staff use violence. Abuse becomes officially recognised in the lives of approximately 30% of adults in the USA.  Yet, most abuse is unrecognised according to major authors in the field.

The Adverse Childhood Experiences (ACE) Study in 1998 was a major research study that compared current adult health status to childhood experiences decades earlier. The study concluded that there was a “strong graded relationship between the breadth of exposure to abuse or household dysfunction during childhood and multiple risk factors for several of the leading causes of death in adults.”

Prior to this study, some psychologists were not convinced that adversity in childhood had a lasting effect on people and there was a lot of talk about the concept of resilience. Attachment Theory wasn't in the frame for people with learning disabilities for a very long time, but very recently it has been brought into focus. You can now see that there is a clear link between trauma and almost every kind of serious mental health condition.

Pathway from trauma to poor outcomes

In the model below, we tried to link the different types of trauma such as emotional abuse and neglect with outcomes. 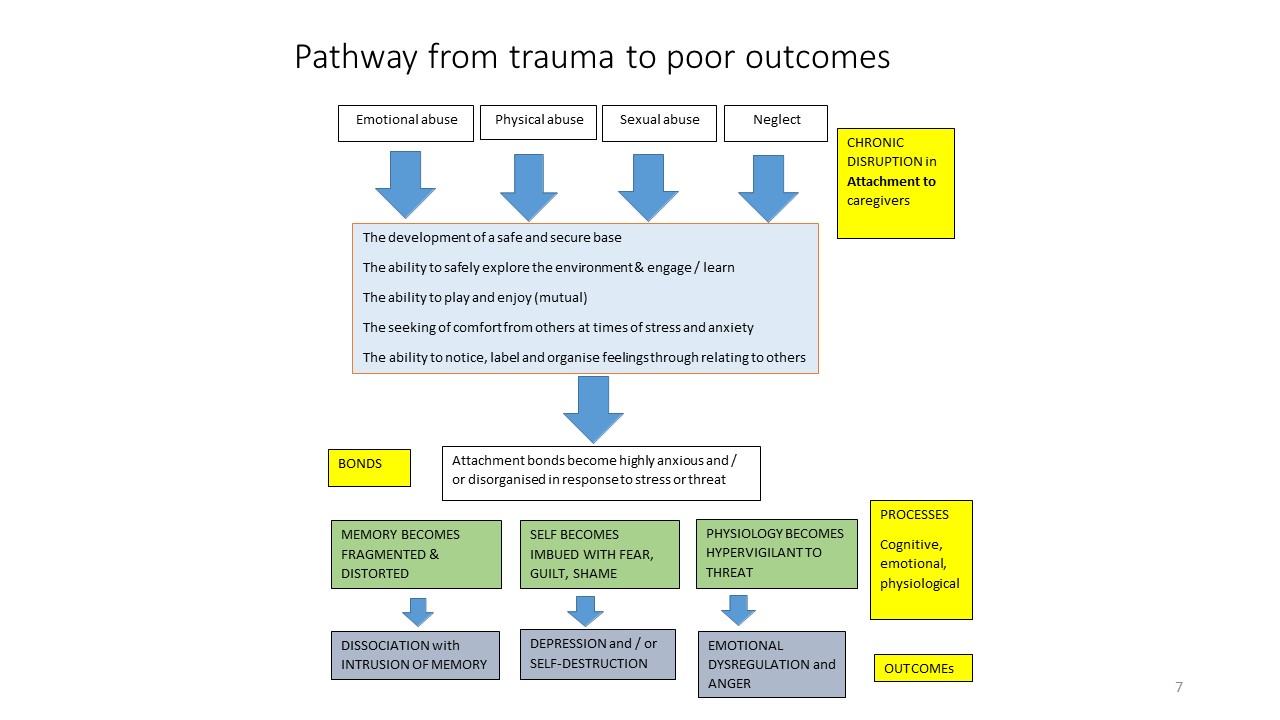 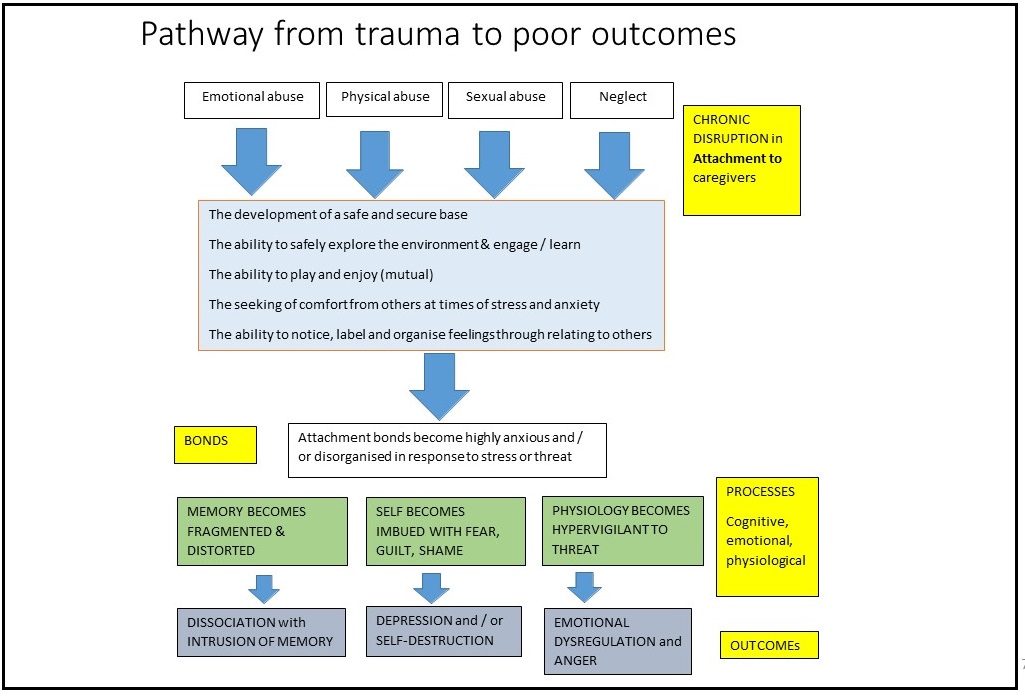 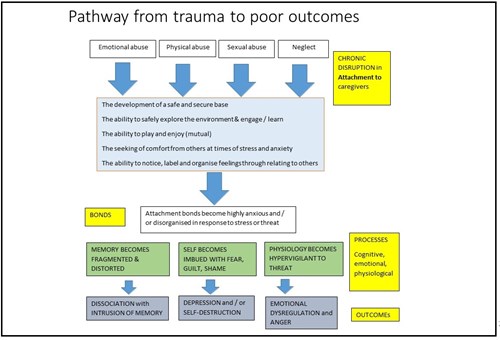 High rates of trauma can affect the ability to form the internal security that comes from parents who help you explore, give you safety and security, and comfort you when you are distressed or hurt. The cut finger test quite a useful test to use in therapeutic conversations because it tells us a lot about the person's story and the kind of relationships they had with their parents.

J.M. Bowlby said in 1953 that “love in infancy and childhood is as important for mental health as are vitamins and proteins for physical health.” His message wasn't really welcomed in the 1950s, when a lot of people with learning disabilities would have been in institutions where they were thought to not require the kind of close family scenarios that we would expect for our own children and for ourselves.

There has been a delay in accepting the kind of message from Attachment Theory and it hasn't become a central part of learning disability policy and practice.

The main guideline that came out after Winterbourne View scandal was called A Positive and Proactive Workforce (Skills for Care, 2014) and it was well intentioned, and mindful of how we treat people in care. It didn't mention Attachment in it. When Attachment is mentioned in things like challenging behaviour guidance or mental health guidance from NICE, it is mentioned very briefly in the long guidance and not at all in the short guidance.

Attachment Theory is well-established in other fields and even guidance for looked after children, which is called Children's Attachment, explicitly excludes children with learning disabilities. It appears the main authors didn't think they had the expertise in that group.

What difference does this make?

Well, if you think about the way children or young people in the care system are thought about, placement permanence is a core outcome for them. Yet, in our services maximum independence is the core outcome. Staff can move on very quickly and no one really thinks about the impact of that if you are developing your independence skills.

For looked after children and young people, trauma is the major cause of attachment difficulties and mental health difficulties. But in learning disability services, we tend to think more about conditioning of challenging behaviours that causes problems getting on with people. Also, mental health issues are seen as a possible biological cause of challenging behaviour, and not an effect of being badly treated.

Consistent caregiving by one or two people is usually seen as essential in looked after children services, but with intellectual disability services consistency between any number of carers – as long as they follow behavioural guidelines – is seen to be essential to reduce behaviours that others find challenging.

In looked after children’s services, it is very important that someone or a small group of people love you unconditionally. But in care services for adults with intellectual disabilities, it is important that caregivers are professional and shouldn't become over-involved. Some guidelines even state that staff should be rotated every hour so that the person doesn't become too bonded.  This is often called “attention seeking” and is a bad thing and to be discouraged.

Relationships are significant and bereavement reactions are expected in looked after children’s services, but with our clients, relationships with carers can end very suddenly without notice. They are often not told, as it is thought to be not in their best interests.

This shows you the level of awareness that there is around Attachment Theory in the services we work in.  That is, there is very little.

What a society believes matters!

The model of institutional care for those with severe intellectual disabilities after World War II did not recognise the importance of deep and enduring attachment figures for overcoming trauma, even when the model was dismantled.

Behavioural models have done a lot of good, but the dominance of behavioural intervention models from the 1950s to present (e.g. Positive Behaviour Support) means that trauma-informed care and attachment theory have been excluded from almost all policy documents, unlike other groups, such as looked-after children.

The trauma caused by behavioural models themselves – aversion therapies - has never been properly acknowledged, apologised for, or compensated.  People continue to be subject to segregation practices, multiple moves of home, and behaviours seen as little more than conditioned responses rather than signs of relational distress.  In the USA, there are still institutions using electrical shock treatments and saying this is okay.

This needs to be acknowledged, because it is like slavery in a way, if you don't acknowledge it then we are never going to move on from it. And it's going to still show its effects in the sort of cultural trauma that we're experiencing.

The obvious explanatory link provided by Attachment Theory as to the rates of mental health issues in adults with intellectual disability continues to be ignored. One objection is that there no special Attachment Theory research base for people with learning disabilities, as though the research base that exists for other people doesn't apply to them, and they are a special kind of person who needs their own research base.  Beth Greenhill, a psychologist in the UK, put it thus: “they have behaviours, we have relationships”.

The last word should go to Roger Wilczek who I have worked with for several years and is an expert by experience.  Roger says that all of his life he has got the message that he is a “loser” because of his disability.  For many years he felt that no one wanted to know him, and he experienced many form of bad treatment, from people turning their backs in conversation to attempts on his life.

He recently wrote a chapter in a book that was very therapeutic to him.  He said: “People need to be kind to children with disabilities.  A little bit more care and protection.  Children with disabilities need a little more.  Don’t push a little one away when they’re naughty or ask for attention.  That’s how we get mental health problems; because we think, ‘No one loves me’.”