Learning Disability Today’s ‘Change It Up’ survey of service users finds that assessment and treatment units (ATUs), large shared housing arrangements, and excessive time alone each drive anxiety. Results from the extensive research are published here today. They provide a clear vision for the local councils and mayors responsible for commissioning social care services as to how they can 'Change It Up' to better support their communities. 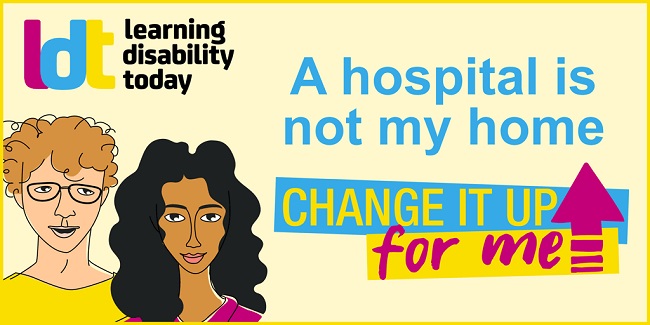 One in four people with a learning disability and / or autism (25 percent) believe ‘being listened to’ when sharing care needs and preferences is what they value most, according to a survey of over 100 interviewees conducted by Learning Disability Today (LDT).

"Dozens have died in ATUs over the last five years... It is local councils and mayoral districts – not central government – that decide how social care ‘looks’."

Over half (58 percent) of those who responded to a specific question about mental health said they experience periods spent alone or living in hospital environments such as ATUs as sad and anxiety-inducing.

LDT’s ‘Change It Up’ polling quizzed 63 individuals with a learning disability and 42 people diagnosed with autism (one had dual diagnosis, providing an overall total of 104 participants) about the approaches to safety, health and quality of life followed by care providers.

Our first results are published today, a week before the national failure to discharge thousands of disabled people living in non-therapeutic Assessment and Treatment Units is confirmed.

Government targets to support the transition of 35-50 percent of people with learning disabilities or autism ‘living’ in inappropriate hospital settings into community alternatives look set to be missed yet again on April 16, a full year after the original Transforming Care deadline came and went.

However the Department for Health and Social Care reiterated as recently as February their stance that it is local councils and mayoral districts – not central government – that decide how social care ‘looks’. This is because it is local authorities who choose which service providers to commission. “We can’t tell them who to commission”, say DHSC.

While blame and deflection festers, modern social enterprises are among those trying to catch the eye of commissioners. They insist that meeting the needs of all those with learning disabilities and autism is not ‘merely’ ethical and a legal duty, it is lower-cost than maintaining the status quo. Therefore, while a long-term funding proposal from Downing Street would be welcomed, there is no need to wait for it to materialise. What matters is commissioning the right service providers, those who tap into the priorities of those they are there to serve.

Respondents were first asked to consider ‘in what scenarios you feel most cared for’. ‘Being heard / listened to’ emerged as the most chosen answer, with five other popular responses featuring not far behind: ‘emotional support’, ‘company’, ‘being looked after by my support worker’, and ‘being coached at my sports club’.

Across the survey, people’s answers reinforced the underreported reality that it is too simplistic to say that all learning disabled people want nothing more than to be ‘looked after’. Equally it is going too far to say that each and every individual craves empowerment to full independence. However whether we are disabled or non-disabled, we all want our wishes to be enacted.

If you depend on others, living the life you want to live cannot be taken for granted. Our survey asked people with a learning disability or autism what makes a place feel save to live. Routine / predictability was their telling top answer. Professional support and security at night also featured, but interestingly ‘living with positive people’ was mentioned more frequently than safeguarding – though measures are essential, of course. Living with family was also considered key by some we spoke to. Those living with five or more other tenants reported being exposed more frequently to conflicts and limitations on transport support than those living among smaller numbers.

What other lessons can those working in service design, delivery or commissioning take from the first results from our Change It Up survey?

Almost half our sample said they were most anxious when on their own. Seclusion and segregation continue to be imposed on autistic and learning disabled people too often, from school-age right through to adults detained in assessment and treatment units. Alexis Quinn, an autistic teacher, author and mother of two, speaks from experience about her own ATU ordeal – and how occupational therapy was what she actually needed – in our exclusive video interview, also released today.

See also: How you can Change It Up

See also: What type of support did you want? (video)

See also: Why did they say they were going to restrain you? (video)

See also: What would a good home life and support have looked like for you? (video)

Surely by now, no further research should be needed to demonstrate that the practice of seclusion is neither helpful nor accommodating to neurodiverse pupils, patients or service-users. Our survey results also confirmed that many people within this demographic find hospital anxiety inducing in of itself, along with loud noises, conflict, and living near people they feel threated by. Dozens of people have died in ATUs over the last five years. Community support is preferred by most, but we heard how some communities feel safer than others. One woman in her twenties we spoke to lives with an unease about her independent living service being positioned adjacent to a men’s hostel.

‘Left out’ and ‘bossed around’

Half our survey sample said excessive instruction left them feeling ‘bossed around’. Complaints ranged from being ordered to wash their hair more often than necessary, through to being rushed or told to “calm down”. One individual supported by an organisation that prides itself on facilitating independent living said they resented being made to declutter “my own house.”

A third of our survey respondents poignantly reported that lacking a ‘sense of achievement’ was what created a feeling of alienation within them most often. Some lamented a lack of accessible activities. Many decried discriminatory policymaking and how frequently they were thwarted by pursuing an interest or activity due to a lack of transport. “There often isn’t space for me,” we heard repeatedly.

Change It Up together

Share your thoughts by commenting below or let us know who you want to change it up for on Twitter using #Iwanttochangeitup.

Save the date: Join the conversation in person at LDT London on December 2.

Learning Disability Today interviewed 104 participants with a learning disability, an autism diagnosis or both in February and March 2020.

Social media respondents were able to self-identify as autistic, learning disabled or both.

Three face-to-face focus group sessions involving individuals with severe, moderate and mild learning disabilities and two individuals with ASDs were facilitated, along with four solo interviews that were recorded on camera.

88 respondents participated digitally through social media polling. The responses of one organisation known to be passing as an individual was disqualified.

Twitter poll responses are anonymous, so there is no way of disqualifying Twitter contributors who may have already contributed on Facebook or face-to-face, or accounting for how many unique polls Twitter followers contributed to.

Brighton Table Tennis Club, Grace Eyre and Speak Out Brighton supported the research in terms of allowing us to attend pre-arranged events, but no previews of research findings, write-ups, graphics or videos were shared by Learning Disability Today with any of these organisations. We thank these three organisations for allowing us to work independently throughout all stages.

One non-verbal individual was supported to participate through the use of a communication book and the support of a support worker.

Results from questions not published today are being published from April - June 2020 on www.learningdisabilitytoday.co.uk/change-it-up