As a parent of a teenager with Down’s syndrome, I’ve seen many newspaper articles about the condition. In the almost 13 years since my son Stan was born, these articles have, in equal measure, encouraged me, upset me, pleasantly surprised me and made me feel patronised. I talk about this in the book that I’ve written about Stan - Down's with the kids.

Usually though, the message has been overwhelmingly positive. And then, the other day; the bombshell. A wholly negative article. But first, some context.

There have been some great articles in newspapers, raising Down's syndrome awareness, but I feel they've often had a glass ceiling. They’ve been good at describing our children as ‘cute and cuddly’, without always encouraging further aspirations for them. I want Stan to play drums at Glastonbury or become a champion swimmer, not just to be the kid that everyone wraps in an 8-year-old bubble and says “aah” to. But those articles at least give our children a lot of respect.

And don't get me wrong; Stan can be quite cute and cuddly – at times. But at other times he can be hard work. And my problem with these “aah” articles is that they've been so nice that they could have the perverse effect of limiting people's expectations of our children.

So, to this latest article. Let’s cut to the chase: The mum is quoted as saying she wish she’d never given birth to her son. My problem is that the article suggests that Stephen’s life has not been worth it. Because let’s mention his name. Stephen Relf. Let’s say it again: Stephen Relf. To those of us on a Facebook group who have commented on this story (there have been many – big surprise), it’s about Stephen Relf’s life.

And here’s my real issue with both approaches. People with learning disabilities can be depicted as either/or. I say in my book: my Stan’s life is far more complex and interesting than a headline. As I write it’s Sunday morning and he’s currently leaving me alone so I can write this. That’s what we do on Sunday mornings. Later he might tip away all of our supply of fruit juice and then go on to tell us something funny that happened in school this week. That’s our life and it’s a big old complex world. And I’ve grown to love it.

So, here’s how I replied to the Facebook group on this issue of the article: “It's perhaps time that some negative aspects are discussed publicly. We don't want to keep saying: "Isn't everything great" when sometimes it's, frankly, s***. But we do want to celebrate when successes occur or when we're just being normal. The concern is that this story engenders an either/or mentality. We're either deliriously happy or on the verge of breakdown. There is room for a more complex story to be told".

There is room for a more complex story to be told

Of course, Stephen’s mum, Gillian, may have been misquoted somewhat. I suspect she would have some positive things to say. If Gillian’s disappointed by the coverage in any way, I’d love to see her expand on what she’s said in a further article.

So, I think that our children can be depicted as either little cherubs or burdens that have ruined our lives. I hope that my book shows that Stan is a complex member of a complex extended family and that it isn’t as straightforward as that. Oh, and I love Stan with all my heart. It skips a beat every time I think of him and his brother. I’m sure Gillian loves Stephen. 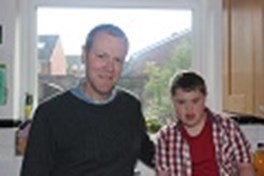 Stephen Palmer writes the Down’s with the kids blog and is also on Twitter.