From a long, hot shower to a swim down at the local leisure centre water pressure is said to help children with autism and sensory processing disorders through a gentle, soothing physical environment. Advocates of aquatic therapy say warm water decreases stress and relaxes muscles and now a new study is to assess benefits including speech development. Darren Devine reports. 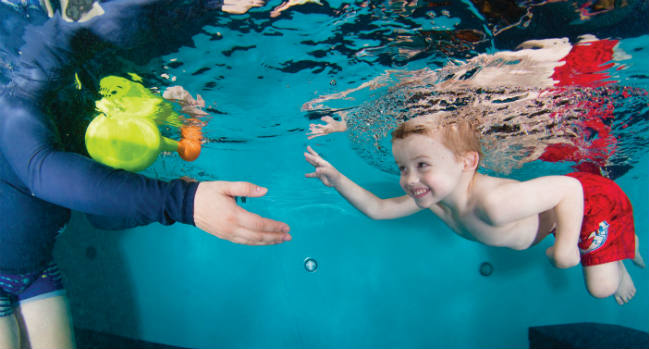 Before four-year-old Riot Craig began splashing around in a hydrotherapy pool he had hourly meltdowns and spoke barely ten words.

Now mum Audrey Craig says a year on from his first session in the hydrotherapy pool at the Turn Centre, in Texas, he’s speaking in full sentences and his meltdowns have improved “significantly”.

Riot, who has moderate to severe autism, is also making encouraging progress with his academic and motor skills. He can now spell and write, is using scissors and is able to manipulate buttons and zips.

In an interview via Facebook Messenger Craig, 32, from Texas, wrote that her son was a “huge runner” before he started hydrotherapy.

She added: “If you didn't have his hand he was gone.”

Craig believes 90 percent of the improvement she has seen in Riot is due to hydrotherapy, with the remainder prompted by land-based occupational and speech therapy.

But she believes even these land-based therapies have benefited from Riot’s weekly 45-minute sessions in the water.

Craig suggests the hydrotherapy has bolstered her son’s attention span and helped improve his responsiveness to the other interventions. Previously, he struggled to sit for five minutes, she said.

With husband Derek, 34, Craig also has a nine-year-old daughter Lily, who suffers from alopecia.

She said family stress levels have improved since Riot started the hydrotherapy, but “the unknown future is always stressful with special needs children”.

Now a clinical trial at the Turn Center is to examine the benefits of aquatic therapy for children with autism.

The non-profit group will compare the effectiveness of one-on-one versus group-based aquatic therapy.

It will study how the therapy affects the social interactions, behaviors and physical activities of children with autism.

In 2014 researchers at the University of South Australia reviewed the evidence on hydrotherapy as an autism treatment by examining four previous studies that looked at children aged three to 12.

They concluded that there “is an increasing body of evidence” that hydrotherapy “may be effective in improving the social interactions and behaviors” of children with autism.

The researchers favoured hydrotherapy underpinned by the Halliwick approach  — this aims to help those with learning and physical disabilities take part in water activities, move independently and swim.

But the Australian team added that while hydrotherapy could be considered “an adjunct treatment” for autism, there were important weaknesses in the earlier studies.

The sample sizes for the studies were said to be “generally small”. One involved a case study with just one child and the largest had 42 children involved.

Also, the diversity of problems and severity found in autism made using standardised tests to measure improvement difficult, the Australian researchers found.

Executive director at the Turn Center Bruce Moseley insists their research overcomes many of these weaknesses.

The research features 60 children and the Turn Center has a medical advisory board with around a dozen doctors who have designed the study, says Moseley.

His team is around halfway through the research, which consists of a 10-week therapy programme in the pool.

It’s still too early to draw firm conclusions, but Moseley is very encouraged by the research completed so far.

He said some “anecdotal outcomes” have been “unbelievable”, with “explosions” in speech.

Moseley said: “I can count seven kids whose speech has just gone from almost non-existent or non-existent, completely non-verbal to talking — complete sentences even in one case.”

The promising results seen so far suggest hydrotherapy can be more than just an “adjunct” treatment as suggested by the 2014 Australian review, Moseley believes.

Physiotherapist Nicky Pither is in no doubt about the clear benefits of hydrotherapy.

Pither says for people with learning disabilities who may struggle with sensory overload 20 minutes of fun splashing in the pool can leave them feeling much calmer.

In hydrotherapy pools the temperature is regulated at around 32°C with a constant or very gradual water depth of around one metre.

The pools often make use of sensory equipment like lighting and sound to stimulate the senses.

These can be more difficult or painful on dry land for people with conditions like Down syndrome and autism, who may struggle with muscle stiffness.

Also, being able to move in the water improves stamina and lung function, says Pither.

Based at the Myriad Centre, in Worcester, which offers support to those with profound and multiple learning disabilities (PMLD), Pither added: “The main one (benefit) for learning disabilities is because they are in water that improves their proprioceptive feedback — so their sensory feedback.

“That improves their body awareness and so quite often you get people with learning disabilities, who struggle to sit still or are constantly on the move. The resistance of the water helps them with that and so they are calmer afterwards.”

Pither, who has worked in physiotherapy with people with learning disabilities for 15 years, also believes it helps with communication and making a connection for those with autism.

“If you’re trying to get individuals to communicate you could splash or you could do some intensive interaction in the water. It’s that much more fun than it is on dry land.”

Pither says a specialist hydrotherapy pool is not always needed to get the benefits water can bring to those with learning disabilities.

In the UK it can be difficult to access purpose-built hydrotherapy pools because they are relatively few and far between compared to the abundance of local council pools.

Pither tends to use the hydrotherapy pool more for people with neurological conditions like cerebral palsy and severe, or Duchenne muscular dystrophy.