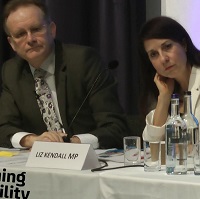 Shadow Care and Older People Minister Liz Kendall has called for reform of the social care system to give people with learning disabilities and their families greater power over the support and services they use.

Speaking as the keynote at the Learning Disability Today conference and exhibition at Olympia on November 27, Kendall said that Sir Stephen Bubb’s recently-published report was the starkest possible reminder of the failure of the health and care system to give people with learning disabilities the dignity and respect they deserve. She branded the government’s failure to move people with learning disabilities out of assessment and treatment units “a total disgrace”.

However, Kendall believes there is an alternative model that could be implemented, even within today’s constrained budgets that could give people with learning disabilities more power and control over their services.

This includes keeping the person at the centre of thinking: “Too often politicians, policy makers and services see individuals and families as a series of problems that need solving,” she said. “They’re not. They are human beings – with feelings, hopes, dreams, aspirations and abilities – who want to live their lives as fully as possible with support that helps them achieve their goals.”

Initiatives such as One Page Profiles – simple profiles of a person that outline what is important to them and what they enjoy doing – were cited by Kendall as things that can make a difference.

Kendall also called for greater integration of health and social care services. “We will never deliver truly personalised care, which sees and supports the whole person, if we continue with a fundamentally fragmented health and care system which treats people’s physical, mental and social needs separately.

“Too many of the joined up, preventative and personalised services I’ve seen have achieved great quality despite the system, not because of it.”

She wants full integration of health and social care, to bring together resources into one budget and also to create the potential for one point of contact for a person. Likewise, Kendall advocated small-scale services, for which there is increasing evidence that they are better for the people who use services, and the taxpayers that fund them.

But most importantly, the people who use services and their families need to be given greater power and control. “People with learning disabilities don’t just want the right to challenge services, they want the right to determine their services,” she said. “That means backing rights up with the power to actually make them a reality.

“The most effective way I’ve seen this happen in practice is through personal budgets.”

Kendall noted that the national evaluation of the pilots of personal health budgets for people with long-term conditions was showing encouraging results too. “It shows that giving individuals choice and control improves their quality of life and wellbeing and reduces their use of more expensive hospital care,” she said. This is something that would be extended under a Labour government, she added.

Other highlights from the Learning Disability Today conference
Elsewhere at the Learning Disability Today conference, charity Brandon Trust launched its latest report, Finding Freedom, which warned that the vast majority of people with learning disabilities remain invisible in our society despite more than 20 years of ‘care in the community.’ For more on that, click here.

Also, Hazel Watson, mental health and learning disabilities lead for NHS England, said that the learning disability programme was focused on making health services more accessible and providing annual health checks to all those who are eligible.

Watson added that work was well under way for setting up a premature mortality review – something that the Confidential Inquiry into the premature deaths of people with learning disabilities called for in March 2013.

Meanwhile, Bill Mumford, chief executive of charity and service provider MacIntyre, talked about health and social care staffing, noting that there are about 1.6 million people employed in the sector in England, but it is estimated that another 500,000 will be needed in the next decade to keep up with demand.

Yet turnover of staff is running at unprecedented levels, Mumford added – up to 28% in some areas – and vacancy rates are also increasing. Added to that, there are increasing numbers employed on the minimum wage or zero hours contracts, which sends a message to those considering a career in the sector. This is something that will need to be addressed, he added.