Drug resistant epilepsy is a term used to describe when adequate trials of two anti-epileptic drugs have failed to control a person’s seizures. Emma Murphy describes how she continuously adapts and adjusts treatment to manage her son's epilepsy.

Research shows that while just 30% of people in the general population with epilepsy have seizures when taking medication, this jumps to 70% for those with a learning disability, highlighting the need for additional support.

For people with both learning disabilities and epilepsy, seizures can be severe, frequent and difficult to control with medication. As a result, epilepsy can have a significant negative impact on their day-to-day lives, and can result in increased hospital admittances, health and social care costs and mortality.

My son, Hugh, was a year old when he was diagnosed with epilepsy and I welcomed the news with a sigh of relief. Here, finally, was an explanation for the skills he’d been losing, for the delays in his development, for the acute life-threatening episodes that were landing him in resus as often as twice a week.

The journey to diagnosis wasn’t plain sailing. These episodes didn’t look like seizures – not like the seizures I’d read about online anyway. They also didn’t sound like seizures – not to the doctors who took notes as I shakily recounted events. The four previous EEGs (an electroencephalogram which captures electrical activity in the brain) had failed to capture any seizure activity at all.

In desperation, I began videoing the episodes, and these, combined with a four-day ambulatory EEG, where Hugh came home from hospital with the wires still attached to him, finally led to the diagnosis of epilepsy.

Relief. We could begin treatment. Life could resume again. 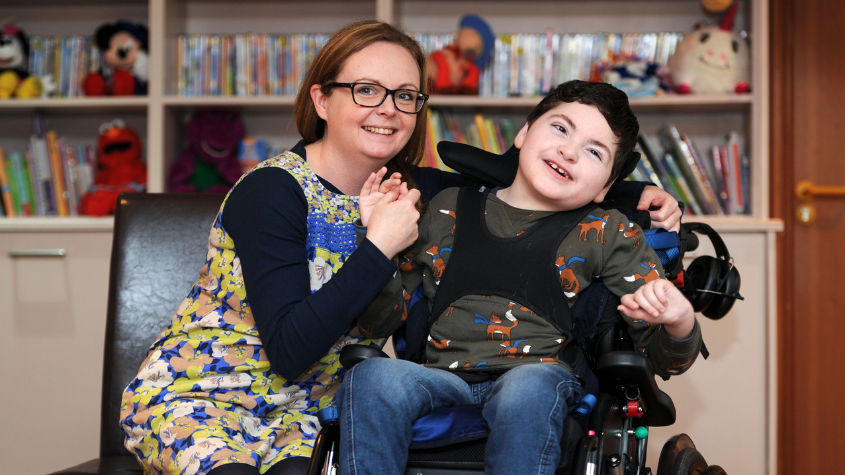 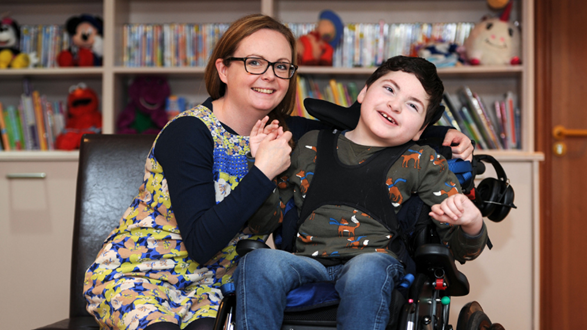 Drug resistant epilepsy: what next?

What I didn’t know then, although I’m painfully aware of now, is that only two thirds of people with epilepsy can control their seizures through medication. For the rest, with ‘medically intractable’ or drug resistant epilepsy, life can be somewhat more complicated.

Once two anti-epileptic drugs have been tried and failed to adequately control a person’s epilepsy, the chance of finding one that will become less likely. Furthermore, the possibility of success decreases with each subsequent drug tried. Hugh tried seven different anti-epileptic drugs, in a variety of combinations, before he was finally classified as having medically intractable epilepsy.

The process of weaning off drugs and reintroducing others is slow and painstaking. I had a spreadsheet detailing the different doses of drugs needed on any given day. They changed week to week. As we reached the required level of each drug in his system, we’d hope for an improvement, but rapidly our optimism would disappear as the seizures continued to ravage his brain and body with alarming frequency and ferocity.

The side effects of the drugs were sometimes as awful as the seizures themselves, causing problems with his breathing, agitation and inconsolable crying or perhaps worst, robbing Hugh of any spark of life, leaving him unresponsive and a shell of the boy that we knew.

A prolonged stint, heavily sedated, in the high dependency unit led to the decision to try something else.

The ketogenic diet, a high fat, low carbohydrate diet is offered as a treatment for epilepsy in most teaching hospitals in cities in the UK. Although theories about why it works vary, it is thought that by forcing the body to use fat, instead of carbohydrates, as a source of energy, it mimics starvation. This produces ketones which appear to have an anti epileptic effect on the brain. We are lucky enough to live close to a major children’s hospital and, rapidly running out of alternatives, were offered a trial.

The decision to start the diet was, for us, an easy one to make. Hugh’s seizures were so awful that we were willing to try anything. In addition, since Hugh was tube fed by this stage, having lost the ability to swallow safely following a rather nasty period of status epilepticus, it would be easy to control his intake of carbohydrates and we needn’t worry about how palatable the food would be – concerns other parents often raise.

The diet was carefully managed and closely monitored. We tested Hugh’s blood twice a day through finger prick tests and fed back to his medical team which included a neurologist, an epilepsy nurse and a dietitian. The input from the dietitian was invaluable in ensuring that we adjusted the carbohydrate content carefully in accordance with the ketone readings.

Results for the ketogenic diet vary but studies suggest that over half the children that go on the diet see at least a 50% reduction in seizures, with a small percentage (10-15%) even becoming seizure free. Within weeks we noticed a significant reduction in Hugh’s seizures and once his ketones stabilised at a therapeutic level, we were lucky enough to witness nine months completely, blissfully, seizure free.

The success of the ketogenic diet lies not only in its ability to stop or reduce seizures, but also in allowing people with epilepsy to be weaned off their antiepileptic drugs. So, after 18 months on the diet, we began to try and wean Hugh off phenobarbital. Unfortunately, even a tiny decrease had his seizures returning with a vengeance. After a stay in the high dependency unit and needing resuscitation, it was decided attempting to wean him off the drugs just wasn’t worth the risk. Instead, Hugh continued taking phenobarbital daily, in conjunction with the diet. And this worked well. For a while.

Unfortunately, as Hugh grew, and his brain changed and developed, the seizures began to creep back in. Nothing significant at first. Nothing we couldn’t handle. Nothing that resulted in an emergency hospital admission.

The diet itself was never a long-term solution. It was only ever planned as a temporary measure. And initially, there was no dramatic increase in seizure activity when, after four years, he weaned off the ketogenic diet.

Over time though, the seizures changed and became more problematic. We began having hospital admissions again. He was needing rescue medication more frequently and we were back to calling an ambulance regularly. A second anti-epileptic drug – clobazam – was added in, initially just to stop seizures developing into clusters and then, as his seizures become more severe and more frequent, as a daily dose. A number of drug increases later, still without any real seizure control, we began looking at other options.

An MRI ruled out brain surgery since there was no focal point from which his seizures originated. In some ways, I was relieved to not to have to make a decision about that. Whilst the option of a possible complete cure would have been amazing, the sheer thought of brain surgery terrified me.

Instead, we were recommended for VNS surgery. Vagus Nerve Stimulation (VNS) is a treatment for epilepsy where a small device is implanted under the skin below the left collar bone. This device, similar to a pace-maker, is called a generator. The generator is connected to a thin wire, which stimulates the vagus nerve in the person’s neck at regular times throughout the day. This sends impulses to the brain, which helps to prevent the electrical activity that causes seizures.

We were told that about a third of patients see significant improvements, a third some improvement and a third it makes no difference at all. It can take from a couple of months to two years after the VNS is implanted to notice a difference in seizure control.

Reported side effects, other than those associated with a general anaesthetic are apparently minimal and include intermittent hoarseness and difficulty swallowing while the device is sending electrical impulses.

The surgery to fit the VNS was relatively straightforward and Hugh was discharged the following day with a dressing on his neck and another on his chest. Hugh recovered quickly and needed minimal pain relief over the following days. Although the scar on his chest is a raised keloid scar, the one on his neck is bravely visible. Two weeks after surgery we returned to hospital for the device to be turned on. This was all done electronically with a large ‘wand’ held over the device in his chest and it was all programmed through an iPad.

The settings can be changed as often as necessary until a therapeutic level is found and we have regular appointments with the epilepsy nurse to check and adjust settings. The strength of the electrical impulse can be adjusted as well as the length of time it is ‘on’ and ‘off’ for, or rather, how frequently it sends electrical impulses to the brain. In addition to the regular impulses generated by the device, we also have a magnet, that we swipe over the VNS at the onset of a seizure, to give a ‘boost’ of electrical activity.

We continuously adjust our hopes and expectations of seizure control

I was dismayed, initially, to notice an increase in Hugh’s seizures. However, these were generally less severe. Over time, they also decreased in frequency and within a year of his VNS surgery, we could say, with confidence, that there had been a definite improvement in his seizure control. He was hospitalised less, required less rescue medication and was generally more alert and engaged. Other than the rather unsightly scar on his chest and occasionally coughing when the settings are first adjusted, we have noticed no untoward side effects.

The battery on the VNS ran out relatively quickly though and within two and a half years, he needed it replaced. The surgery to replace the battery was quick and simple though and the added bonus was that the device was replaced with the latest model which now had an ‘auto-stim’ feature. This automatically sends an electrical impulse to the brain when it detects an increase in heart rate. This is in addition to the regularly programmed impulses and the boost that the magnet gives. With this new updated VNS, we have seen the best level of seizure control yet and even managed a full 17 months without a major, life threatening episode.

I initially assumed that the diagnosis of epilepsy would lead to effective treatment and that life could resume as normal. However, we have had to continuously adapt and adjust treatment to manage Hugh’s epilepsy.  Oftentimes failing spectacularly to maintain any level of control at all. We’ve also had to frequently adapt and adjust our hopes and expectations of what we can achieve in terms of seizure control. Hugh isn’t, and I doubt ever will be, completely seizure free. Yet, thankfully, the VNS, gives us another tool in our armamentarium. And for now, that is working reasonably well.