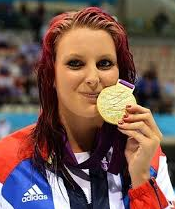 After her race, Olympic gold medallist Applegate (pictured) said she was "very happy with her PB [personal best time] and bronze" and is looking forward to her main event, the 200m freestyle, later in the week.

Their successes follow the record setting performance by England's Tom Hamer and Wales' Thomas in the first-ever event for swimmers with a learning disability at the Glasgow Commonwealth Games, which ended on August 3.

Hamer and Thomas will be competing in the same event, the 200m freestyle for Great Britain at the European Championships, which run until 10 August.

Glasgow 2014 was the most inclusive Commonwealth Games to date, with 300 para-athletes from more than 20 countries competing for 22 gold medals in cycling, athletics, swimming, powerlifting and lawn bowls.