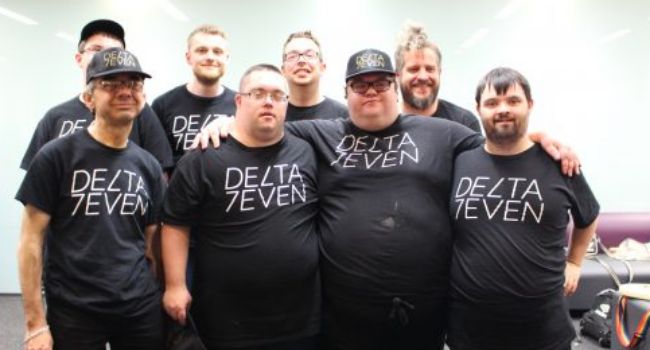 In 2014, the band's members met through a community arts project for adults with learning disabilities in East Sussex. The project was created by Culture Shift, an organisation that involves the community with creative and cultural projects. The end of the ten week course was not the end of Delta 7; it was just the beginning. Delta 7's members continued to work together, supported by Culture Shift, and have gone from strength to strength.

"The Jungle" is Delta 7's debut single, released in 2017. Their music has been described as infectious and hypnotic, drawing comparisons to to The Fall.

Born from a project to help those at risk of social isolation to become involved in the community, the project has certainly enriched the lives of band members Mikey Reynolds, Lucy Walker, Fraser Caygill, Craig Post, Elliot Caygill, David Campin, and Harry Fairchild. "Delta 7 is like a home to me, like a family singing altogether in a big group", says Harry.

First and foremost, it's their mutual love of music that unites the members of Delta 7. It's not necessary for a listener to know about their learning disabilities to enjoy and understand their music, says Mikey. "Our music isn't really about that. It's about our thoughts and expressions, things that happen to us and things that we care about".

Whilst disabled people achieving success and displaying great talent should not be viewed as an anomaly, the music industry is still blighted by prejudice - and Delta 7 know about this all too well. "We want to help to promote people with disabilities", Fraser says. "We want to show what people can do and make life better for people, so that they are included more".

"We are helping to inspire people who feel on the outside of society, like they don't quite fit".

Delta 7's song-writing process is truly collaborative. "We think of something we want to write about and then we all join in, chipping in different ideas", David says. "Someone starts it off and then we all chip in. We usually think of the chorus first and we have a guitar to hand so Tom plays music in the background while we come up with the ideas".

Performing at the Oxford Human Rights Festival last year, the band's concern with social justice is evident. “Well, it’s important to everyone, isn’t it? We talked about it and then we decided to write a song, especially for the gig. It’s called, ‘Everybody needs human rights’ – we need to be listened to, we need to be given a fair chance, that’s it really isn’t it? We all deserve that".

A mini-documentary about the band, created by filmmaker Rosie Baldwin, won a competition to be shown in Picturehouse Cinemas across the country. It seems that the importance of showcasing the talent and spirit of differently-abled people was not lost to the judges, who included Bond producer Barbara Broccoli and Gurinder Chadha, the director of 'Bend It Like Beckham'.

In this way, Delta 7's members have become both advocates and inspirations: Elliot says that they "stick up for people with disabilities"; Fraser says they inspire them. "It's a different way of standing up for what you believe in", Lucy tells the documentary's audiences.

Tom Salway, a musician and friend to the band who helped and supported them, sadly took his own life in August 2017. The Associate Director of Culture Shift, the organisation whose project facilitated the band's creation, says that the filming of a follow-up documentary to 'We Rise' has been cathartic for Delta 7. "The loss of Tom and the journey that the band has made in dealing with grief and supporting each other will be a big part of the film which is due to be released later this year".

"We hope it will be a good tribute to Tom and will show how powerful music can be in helping people to express their feelings, build relationships, and cope with life generally", says Julia Roberts.

The future of Delta 7

Whilst the loss of Tom will always haunt Delta 7's members, his legacy lives on through their music.

A number of workshops are already in the calendar for the year ahead. The band mentors other people with learning disabilities, giving them both the advice and confidence needed to make music. They've also recently received a grant from the Arts Council.

Delta 7 is optimistic about the future, their excitement evident in their responses to the question of what the future holds for them: "rich and famous!"; "rock and roll!"; "Change the world!"; "more performing. We'd like to go on a world tour"; "more inspiring people, raising awareness, raising money by selling more T shirts and CDs"; "more workshops and teaching people".

There's no denying that Delta 7 are changing the music industry for the better. I guess talent doesn't discriminate.

The band are supported by musicians Tom Cook and Sam Baldwin and managed by Julia Roberts of Culture Shift.

More information can be seen at www.cultureshift.org.uk and the band can be followed on Facebook (@Delta7band) and on Instagram (delta7cool)