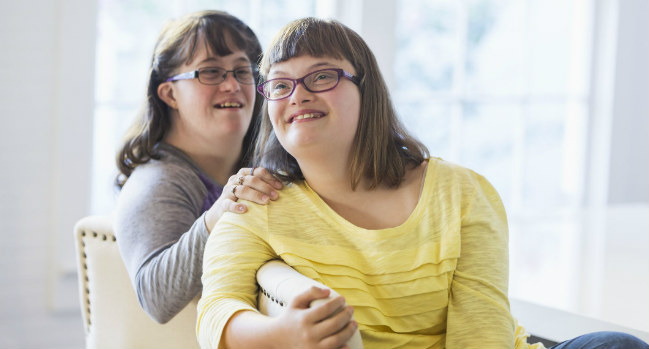 A regular part of my work involves supporting people who display behaviours that challenge. What may appear to be tiny alterations in routine can be upsetting if you have a learning disability or autism and may cause what seems like an extreme response.

Head-banging, spitting or biting could be triggered by something as simple as changing the time of morning coffee time or what someone eats for lunch. Anyone working with people with learning disabilities will know only too well the negative impact of challenging behaviours on quality of life. It can lead to self-injury, isolation and the over-use of medication or restraint.

There are many reasons why people respond in a way that puts themselves or others in danger. Feelings of exclusion or frustration can be factors as well as their sensory environment such as bright lighting or excessive noise. Pain can also be a cause - a person with autism may not be able to communicate that they are in physical distress, or understand how to process what they are feeling.

At Turning Point we use positive behaviour support (PBS) to help individuals reduce their need to communicate through such behaviours. PBS is used elsewhere. The difference here though is we use the framework alongside a person-centred outlook based on their specific needs such as mental health and sensory processing.

Instead of a one-size-fits-all approach, we look at each individual’s goals and behaviours. This involves interacting with the person concerned in a way that is appropriate for them.

We also include other professionals involved in their support, as well as family members, in drawing up a bespoke support plan that includes for example ways of managing the person’s stress and anxiety. By ensuring we understand their challenging behaviour, why they behave that way and what they are communicating, we can then bring about positive solutions.

A total of 27 people have been referred internally to our Specialist Community Outreach team for PBS since January 2017. Our approach is already proving successful. The number of incidents involving one individual we support dropped from more than 25 a month to less than five in the space of three months.

A number of others with behaviours that challenge have been able to move from secure settings such as hospitals into their own homes. With PBS, they are being helped to live meaningful and relatively independent lives in the community.

Another crucial benefit of person-centred PBS is that it offers an alternative to medication. Up to 35,000 adults with a learning disability or autism (or both) in England are taking medicines daily which are designed to alter mood and behaviour despite there being no clinical justification, according to Public Health England.

Turning Point has signed up to the STOMP (stopping over medication of people with a learning disability, autism, or both) campaign which is seeking to end this practice. If more services used approaches like person-centred PBS more widely, then this could become a reality.

We have used the STOMP initiative alongside PBS to reduce the use of psychotropic drugs. Medicating the people we support has always been a last resort, but PBS has enabled us to manage behaviour in some individuals so that drugs are not used at all.

For example, we had one person Ben (not his real name) who was distressed because of a change in his living arrangements. His quality of life was suffering because his challenging behaviour was affecting his ability to take part in everyday activities.

Ben had been with another care provider where overly restrictive restraint holds and medication were used during incidents. These were stopped in a planned way, and a physical intervention training model accredited by the British Institute of Learning Disabilities (BILD) was introduced as an alternative. This method of managing Ben's behaviour included training staff in how to de-escalate incidents such as how to avoid being grabbed and hit instead of physically restraining him.

The first step was to do an initial assessment by meeting with Ben and his support team. The focus was on issues such as his likes and dislikes, his communication needs and what we hoped to achieve together with Ben. This assessment provided us with valuable data on the incidents involving challenging behaviour that were occurring.

Before we started supporting Ben in March last year, he was regularly given medication. After a planned reduction programme, the drug was not used at all in February this year for the first time. This has resulted from approaches to support Ben proactively when he is anxious such as staff playing calming music to him, giving him a foot massage or encouraging him to take a soothing shower. Raising awareness among managers and support staff about the impact of psychotropic medication and how PBS can provide an alternative has also been vital.

What is crucial around the successful use of PBS is that staff are trained and supported to implement it properly. Dealing with behaviours that challenge can be demanding for staff. A high employee turnover is often the result because the right support and training is not in place.

Our specialist community outreach team ensure they provide the necessary tools for staff, with back up from colleagues in learning and development and input from those involved in risk and assurance. The focus for staff is to use practices that are least restrictive, agreed by all and that have been clearly outlined in a support plan.