In this guest blog, Steve Palmer talks about how a T-shirt slogan is galvanising parents of, and people with, Down’s syndrome – and how social media is also playing its part in this.

Something's happening to galvanise people with Down's syndrome in Britain and their families. I'm not talking about the fantastic CBBC show My Life: Breaking Free although if you're new to the world of Down's syndrome, a quick watch of this half-hour show is very inspiring. Teenagers doing what they want to do, but it doesn't shy away from issues of feeling isolated, bullying and confidence. I'm also not talking about taking inspiration from the USA, where, for instance, Tim Harris, who, with support from his business-minded brother, has opened a restaurant serving food, drink and hugs.

"It's a lot more complex than some people think"

There are always lots of stories out there like this that I send out on social media. But something else has trumped this. And it's only a slogan on a T-shirt: "Keep Calm. It's only an extra chromosome." Well, there are many derivations from the Government wartime slogan but I don't mind that the Down's Syndrome Association has gone ‘route one’ here because it works. And I should know. I've been out running in mine and, in a blog on my site I've explained why I positively encourage being stared at!

I think the slogan sums up what many parents – and people with Down’s and other learning disabilities – feel about how the world looks at us. I was talking to my eldest son recently about this. He says that his brother, Stan, who has Down’s syndrome, has an innate ability to judge how people are feeling. He can pick up on the smallest of nuances and if someone's upset, he's the man who will do the looking after, thank you very much. He can also sometimes throw a remote control at you. The message is that it's a lot more complex than some people think and that's why the T-shirt slogan sums this up nicely. So, he may have a learning disability; but he’s not stupid.

I was lucky enough to be asked onto BBC Breakfast in 2006 to talk about Downs’ syndrome. I said that I wanted people to relax a bit more and understand a bit more. I wish I’d had that slogan then.

Since writing the running blog, I’ve changed tactics slightly. Now, if I get a smile, I give a thumbs-up. Usually it’s a smile of recognition. Just now, I ran past a man who’s a wheelchair user, with his personal assistant, and they both gave me a broad grin. So, hopefully the love is being felt in the wider disability community.

But for me, the biggest surprise has been on Facebook. I follow quite a few people but they don't seem to get a look in on my wall feed, because every other picture, every other moment of the day, seems to be someone in the Keep Calm T-shirt. And it's galvanised the movement, so that it's like a political slogan that we as parents, and people with Down's syndrome, are wearing with pride. At the time of writing, there's eight year-old Thomas, proudly sporting the T-shirt. There seems to be a new confidence that’s hit the ‘movement’.

This ‘campaign’ (for want of a better word) lends itself perfectly to social media. At first I started posting my thoughts just to my local group, but then I realised that if I wear my T-shirt out on a run in the park then I should have it proudly displayed on my public-facing Facebook page and blog. And those Facebookers that are your friends, who don’t live in the learning disability world, could be ripe for a bit of awareness-raising.

So, it’s just a T-shirt, but it’s also more than just a T-shirt. And I love mine. If you see me running in it, give me a smile and I'll probably give you a thumbs-up. 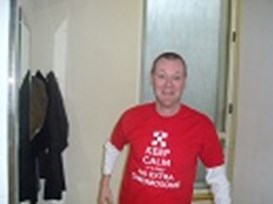 Steve Palmer is down’s with the kids and chair of PODS North London.