Ian A McMillan looks at initiatives using football to help people get fit, make friends and feel more part of the community…

When Sue Baker and her daughter Natalie heard about the football training sessions offered to local young people with Down's syndrome, they were keen to take part. 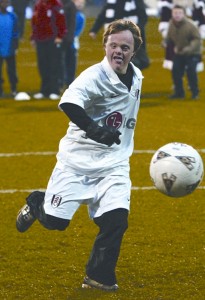 Natalie, who is 16 in July, comes from a football-mad household in Surbiton, Surrey. Despite having an older brother and a father who are ardent Chelsea fans, Natalie had grown up with only a passing interest in the 'beautiful game'.

The references to Chelsea Football Club were so frequent at home that, as a young girl, Natalie named her pet rabbit 'Chelsea', as it was one of the few words she could say clearly.

However, as it turned out, it is not the blue kit of Chelsea that Natalie dons when she plays football, but rather the black and white of their Premier League neighbours, Fulham FC

For the Friday evening sessions, which, depending on the weather are held indoors in asports hall or under floodlights on an Astroturf pitch at RaynesPark High School, are run by Fulham FC's Community Sports Trust.

The Trust runs various well-established projects in the local community, working alongside organisations such as the local primary care trust to cut childhood obesity rates, for example.

It also has a history of running various projects in south west London and Surrey for young people with learning disabilities.

Susi Williams, the positive minds co-ordinator with Fulham FC'scommunity sports trust, was one of a number of individuals who spotted that those with Down's syndrome appeared to be missing out.

Working closely with the Down's Syndrome Association and otherorganisations such the Royal Borough of Kingston, Sport England andthe Premier League, the Fulham Badgers were born in 2006. MsWilliams explains that the Friday evening sessions, at which she isa trained coach, attract from 20 to 25 players. The age range isfrom five to 33 - the sessions for a younger age group are a recentinnovation. The cost is £30 a year per person. She points out that many young people with Down's syndrome have associated physical problems, such as respiratory or heart conditions - but stressesthat these are taken into account during football practice.

"The sessions are conducted at their pace. The young people have been down to Fulham FC's training ground and have been in sessions witha personal trainer, who measured their heart rates and oxygenintake. "

They also had fun on the rowing machines and the bicycles, and even did a bit of boxing." Ms Williams offers information onhealthy eating and general fitness. "They are running off quite abit of energy each week."

"Being involved in these sessionshelps them to feel like they are part of a community and widersociety. They are not labeled as having a learning disability: theyare taking part in a team sport." There have been manyopportunities to appear at Fulham's ground on match days - whetherthey are taking part in half-time penalty shoot outs, walkingaround the pitch with Billy the Badger (the club mascot),interacting with the players or being spectators. The sessions areappreciated by the parents. One mother said she appreciated meetingother parents as they could swap stories and share common frustrations.

"We can have a good old moan about the (learningdisability) professionals when we get together! Then next time we see them, we are much more polite." Another reported an unexpected consequence of attending the sessions: her son's social life had broadened. Some had noticed that the sessions helped to develop the players' concentration and their ability to follow instructions.

Brief games of basketball are held during the sessions, t0 encourage passing to team mates. Ralph Greaves, whose 16-year-oldson Jack is a regular player said, "He absolutely loves coming. It's the highlight of his week. He loves the friendships, and being part  of Fulham FC. "Jack has become a supporter and we go toFulham matches regularly - even though I'm a Chelsea supporter!"

Sue Baker is a councillorwith the Royal Borough of Kingston where she is a passionateadvocate on behalf of disabled people. She is also the localauthority's champion for learning disability and attends the weeklysessions of its disabled parliament. "What makes these sessionsspecial is that the young people are taking part in a proper sport- it's not a token gesture or just a 'kickabout'," she said. "I'mreally impressed by how they gear the sessions to the ability ofthe young person. Some of them are pretty good footballers, whileNatalie, for example could hardly kick a ball when she firststarted. Now, thanks to the training, she has learned to control aball, which makes her very proud. "There is an element ofcompetition and they play each other in teams and, of course, theexercise is good. But I really like the social element as well:teenagers with Down's syndrome, especially if they go to specialschools out of their borough, can find it hard to make friends.Like all young people they will choose their own friends but in agroup like this they have a wide choice. "One thing that reallyimpresses me about the young people is that, while they know theyhave to score for their team, they all celebrate in the same way iftheir opponents get a goal. It's 'good goal' and 'high fives' allround!" A few years ago, Natalie suddenly began putting on weightin an alarming fashion. Eventually, a diagnosis of hyperthyroidismwas made and Natalie was prescribed regular medication. For Sue,the weekly football classes play a key part in helping to maintainNatalie's weight.

Jeff Davis, the FA's development manager for disability, said: "Ouraim is to be as inclusive as possible. We want everyone who wantsto play football to be able to get involved as near to their homeas possible." Later this year, Davis and colleagues will beginworking with England's learning disability team in preparation fornext summer's fifth World Football Championships in Limpopo, SouthAfrica. The tournament is organised by the International SportsFederation for People with an Intellectual Disability. Held duringAugust and September, the tournament follows the traditional WorldCup.

Patricia James, the DSA's corporate fundraising officer, says DSActive was created in 2005 after parents reported that their sonsand daughters were often "left on the sidelines" when their peerswith learning disabilities played sports. They will often be at adisadvantage physically because having Down's means they find ithard to take up oxygen and it affects their metabolic rate, MsJames explains. "This, in turn, results in poorer strength andmuscle mass, and a higher body fat content." In 2006, a linkbetween DSActive and Fulham's Community Sports Trust led to thecreation of Fulham Badgers. Now the Badgers have become the pilotfor a growing number of London clubs. For example, last year inMarch, DSActive helped launch the QPR Tiger Cubs. On 21 March, tocoincide with World Down's Syndrome Day, the 20-strong Tiger Cubssquad showed off their skills at Queens Park Rangers' stadium inwest London in front of 18,000 supporters for a match with BristolCity. Over in south east London, Charlton Athletic followed suit byunveiling its team in April.     Ms James adds,"Down's syndrome is the most common form of learning disability inthe UK. For the clubs, it gives them a great opportunity to connectwith their community and their fan base." Ultimately, she hopes tosee the creation of a DSActive league with links to clubs acrossthe UK within five years.