School and college transport can mean the difference between autistic young people getting the education and training they need and parents facing an impossible juggling act trying to balance work with the school run. Here we speak to parents planning a judicial review of one council’s decision to slash its transport budget. 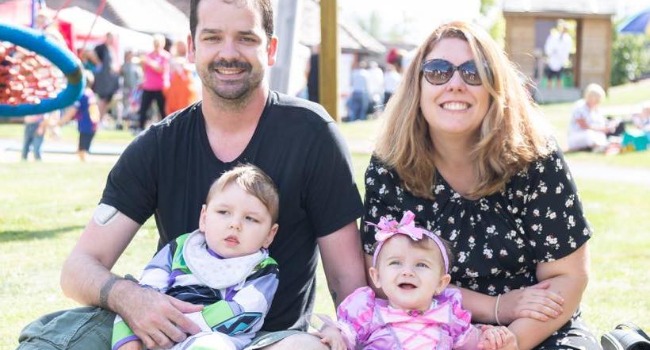 Two-year-old Harrison Henry has a rare chromosome deletion that has left him unable to roll, sit, walk, stand or crawl.

Parents Madeleine and Dave, from Redhill, Surrey, sent him to the nursery in a special educational needs school where, until last year, pupils were able to get transport, but now Surrey County Council has “cut down on it completely”, says Madeleine.

Harrison’s condition, known as FOXG1 syndrome, means he also has uncontrolled epilepsy and is tube fed through his stomach.

Poor speech and social skills and severe learning disabilities are also linked to FOXG1, which is classed as an autism spectrum disorder (ASD). Harrison’s condition means he stops breathing when having seizures and needs constant monitoring. Life expectancy with FOXG1 is massively truncated. On its website, the International FOXG1 Foundation says the oldest person in the world they know of is just 29.

Given the extent of Harrison’s challenges, the family applied for transport to his school on the grounds of exceptional circumstances but were turned down. The family, who live just over two miles from their son’s school, says though pre-school children do not get transport, Harrison qualifies when he turns five.

But in the meantime the family are buying a bungalow better suited to their son’s needs that is further away from the school.

Along with two other families Harrison’s parents plan to challenge Surrey’s transport policy in the High Court on the grounds that it unfairly impacts those with special educational needs and disabilities.

The couple, who also have 15-month-old daughter Ella, have complained to the local government ombudsman, but have not yet had a response as the watchdog has been bogged down by delays linked to coronavirus.

Last year Harrison spent much of his time in hospital with chest infections.

And though his school has remained open during the coronavirus outbreak, the family have chosen not to send him because of his underlying health issues.

His mother says he needs a one-to-one support in a taxi in addition to the driver as it’s not possible to constantly monitor him while behind the wheel.

She added: “The trouble with the drive is that I don’t really go out much with them on my own and you need someone watching him. It’s hard to watch him and drive. He has seizures.”

A barrier to independence

Alicia McColl believes college transport could mean the difference between an independent adulthood for her autistic son Kian Hollow and a life of isolated and marginalised worklessness.

Getting Kian, from Farnham, Surrey, to college to train as a carpenter will do so much than enable him to learn how to make a dovetail joint or fit a mortice lock - it could transform his self-esteem.

But Alicia says her son has also been cut adrift by Surrey’s transport policy. Under the previous policy McColl believes the council might have provided transport to get Kian to Guildford College, where she hopes he will complete his course.

In an email Kian, 16, who also has attention deficit hyperactivity disorder (ADHD), sensory processing disorder and a speech and language disorder, has said he would struggle to get to college on a bus. He wrote: “I would feel very anxious and want to get off, not because I don’t like people but because I don’t like being close to people.”

The need for one-to-one support

His mother also feels the travel training used to help some people with autism get about independently on buses and trains would not work for her son. Instead, she wants him taken on the 10-mile journey in a taxi with one-to-one support.

She said: “It’s rush hour to get the bus. The bus will be rammed with other children, Kian will freak out.”

Travel training would not “remove the sensory processing disorder, it doesn’t remove the fear of being in a small space with lots of other kids”, added Alicia.

Before the coronavirus lockdown Kian was volunteering with a local heritage railway where he helped restore carriages. Kian said the role made him realise how much he enjoyed the creative side of working with wood and that he would like his own carpentry business. His mother said he would complete his course with one-to-one support.

She wants Kian to learn to drive so when he completes his course he is not depending on buses and trains to get around.

Should she fail to win her transport battle she is considering converting a garage at home and taking control of Kian’s health budget to fund a private trainer to teach him carpentry skills.

But overall McColl, 46, who works in marketing, believes her son would benefit most from a college course. “I would prefer him to go to the college because it would be better for him socially. He’s going to be with other kids.

“It’s normally a three-year course, but I think it will take him four or five years because of his speech and language difficulties and in that time he’ll be around lots of young people and he’ll get to know people.”

In a statement, Surrey County Council cabinet member for education Julie Iles said eligibility for free transport is based on distance to the nearest school or suitable specialist setting.

On Kian’s case she added: “Most of our children with special educational needs are capable of going into paid employment in the future, but they need the right preparation and support, part of that is travel training and we have a responsibility to ensure these children do reach their full potential.

“We’ve also committed capital funding to bring more special educational needs and disability school places closer to home, so that these children can go to school in their own community settings where they can make friends, be at home mixing with other people and have a social life outside of school. We are doing this over the next four years with almost 900 places coming on stream.”

Caption: Madeleine and Dave Henry with their children Harrison (left) and Ella.

Caption: Kian Hollow at the heritage railway where he does voluntary work.