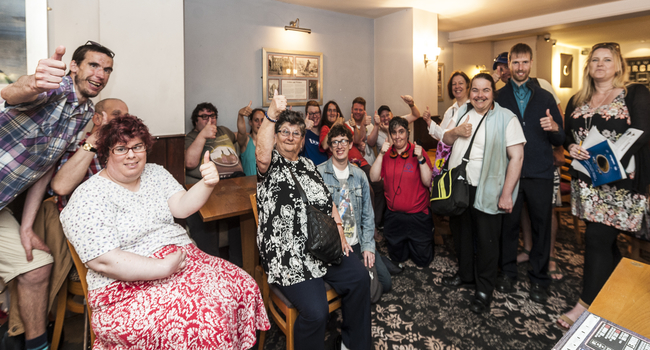 Twice a week in Hastings, a group of friends, who all have a learning disability, drink a few pints and catch up at the local pub - just like everybody else.

Sonia Reed, who boasts a Gold Medal in the Special Olympics, founded the Friendship Group fifteen years ago. “It was only four people that started it and now it’s, like, 25, 26 people", she says. "We are there every Tuesday night and Saturday: without support workers, without parents, without carers, in the pub like anyone else having a drink and a laugh with our friends…as we should be. We are visual in our communities and not shut away."

Whilst the group is primarily about friends meeting up, it also sends a message to the general public: people with learning disabilities have every desire - and right - to inhabit public spaces and be a part of their community.

Disappointingly, a few people have felt the need to voice their opinion about the group being "unsupervised" and "drinking alcohol" – shock, gasp, the horror!

“It’s the looks, the stares, the sniggers, the comments under people’s breath that happen a lot to people with a learning disability", says Sonia. "These attitudes and behaviours that people with learning disabilities encounter in their daily lives and within their own communities need to stop."

Sonia believes that by continuing to host meetups in the face of discrimination, the group will "chip away at some of those attitudes and hope that the looks, stares, and comments under the breath become less.

"My group helps to challenge these attitudes and behaviours by making sure that people with a learning disability are seen in our community. I think the group is brilliant. Some people have learnt a lot from just being part of a group.”

On the whole, the community - and the pub that hosts the Friendship Group - have been welcoming and accepting, as they should be. “Come down and try a group and, you know, the group will welcome them", is what Sonia would say to potential attendees. "In Wetherspoons they really take care of us. Any problems, we go to them.”

"We’re just like normal people, you know, it’s living in the community and joining in”

As Co-Chair of the East Sussex Learning Disability Partnership Board and Local Network meetings, Sonia has been a fierce advocate for both herself and others with learning disabilities for nearly twenty years.

“We met Sonia at day centre and she said, 'you’re going to have to come down' and his confidence has just grown enormously", Kyle McKeown's mum, Audrey Stretch, tells viewers of a short video about the Friendship Group. "He’ll talk to all his mates if he’s got problems. He was, in the past, bullied because of his special needs." Kyle agrees: “You get new people to join and making friends".

“You don’t feel like you’re pressured into doing anything ‘cause you’ve not got anyone there nagging at you", says Mikey Reynolds. Andrew Spice agrees, saying “we do like meeting up and if Sonia was standing there, we would say 'thank you' to her.”

It appears that many people's lives have been changed for the better by Sonia; according to Kyle, “she’s a tremendous mate, she’s done a lot for us, she’s taught me right and wrong".

"We’re just like normal people, you know", says Sonia. "It’s living in the community and joining in."