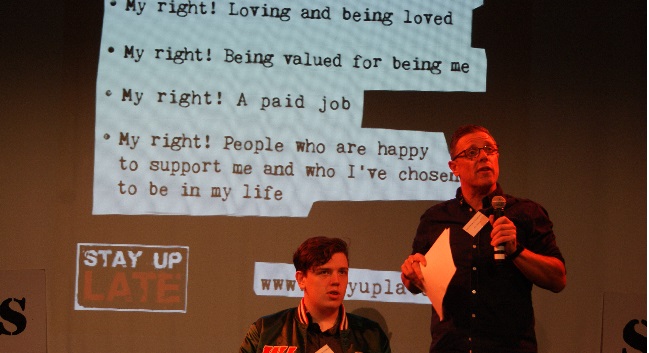 Supported Loving is now two years old. Before it existed I was not a conference “regular”. I now spend a lot of time at conferences, as an organiser, speaker or running workshops. They typically fall into three camps: the good, the bad and the ugly! I am pleased to say that last month's 'Unordinary Conference' was one of the good ones! I expected no less from the team behind Stay Up Late: their presentations and enthusiasm always really stick with me; they are trying to break the mould and do something different.

Stay Up Late focus on campaigning for people to live ordinary lives with rich relationships, fun and meaningful things to do with your time, and being in control of your life. The (un)ordinary conference launched their manifesto for an ordinary life. This includes the right to love and to be loved and the right to make your own friends. Supported Loving also believes these elements are fundamental to an ordinary life. People with learning disabilities are human just like the rest of us, so why would this be any different?

'We are in charge'

The conference started with Tilly Millburn and her pig Del telling us that they are just like Stay Up Late - they do not like to follow the rules or be told what do to (neither do I!). The conference was (un)ordinary as all the presenters had either a learning disability and/or autism and, as Tilly said, “we are in charge”. They had an opportunity to tell professionals how they can (and do) lead ordinary lives and hope professionals would take this on board, make changes to ensure everyone can lead the ordinary lives that we, as people without a learning disability and/or autism, take for granted.

The conference had three key themes: communities, relationships and jobs. We were asked which one we felt was most important. I am clearly focused on relationships, in its broadest sense- by which I mean, meaningful connections with people who care about us. Without this, what is the point of life?

The presentations were wonderful. Inspiring. It was powerful to see people given centre stage to express themselves in whatever format suited them – speaking directly, videos or having a person close to them share their story while they stood by them. People were living such full lives, but it was sad to know this was not the reality for many people with learning disabilities. But that was the point!

What struck me throughout the day was the impact of good support. Once the person was supported in the way that worked for them, they flourished. Fin and his Dad spoke about Fin’s poor experience in school: a horrid tale of restraint and a lack of understanding. Fin is now at a new school where he is supported in a way that suits him, is able to manage his emotions much better and is doing amazingly.

With good support, Ben was able to fully immerse himself in his true passion, bashment music. He had developed a rich network of friends, felt truly part of the scene and had experienced life changing results. With the right support, Emily was able to start her own craft business and develop a rich social life.

The importance of having the right support continued into the relationships section of the programme. It was positive to see younger people aspiring to leading an ordinary life. Fin for example wants a wife and two children (a girl and a boy). This positivity is tinged with sadness, as I know what a struggle this will be. Parenthood is another taboo for people with learning disabilities, another ordinary part of life too frequently denied.

Laura shared her story of her son Alfie and how being a mum was such a joy and bought a real richness to her life. With the right support, parenthood is possible. I was also reunited with Phil and Alison who appeared in one of Supported Loving’s earliest videos. They were told they were unable to marry for many years, despite both being adults with capacity. Their learning disability was used to deny them a basic human right. Phil felt this was a load of “b******s”! Swearing is seen by many as something people with learning disabilities shouldn’t do or is labelled “challenging behaviour”. However, people without a disability can, and do, swear freely (and frequently).

I agree that the challenges Phil and Alison (and presumably many others) face are total b******s. When I speak professionally at conferences and in training, I have to remind myself that, like in the Big Brother House, “You are live, please do not swear” because I feel so angry. If I was denied the elements that make for an ordinary life, my swearing wouldn’t be the half of it! I am annoyed that people are treated like this, and worse still that this is accepted as the “norm”. Relationship are seen an optional extra, not a fundamental part of an ordinary life.

It is crazy that, in 2019, Supported Loving and Stay Up Late are campaigning for fundamental human rights for people with learning disabilities, but we are! I also find it crazy that the majority of people with learning disabilities do not stay out past 9pm at night, but they don’t! Until we see substantial changes across social care, we will still need people fighting the good fight against oppression. Supported Loving is glad to have people like Stay Up Late down with us in the trenches! Vivi la revolution.  Never Mind the B******s – Just Support Me to Lead an Ordinary Life!

Dr Claire Bates is a Quality Analyst and Researcher at the Choice Support charity.