Notting Hill Carnival was designed to unify the community and serve as a vehicle for social inclusion, which makes it a perfect medium for other excluded, misunderstood or underrepresented groups to carry the same message across, writes Harrow Mencap CEO Deven Pillay. 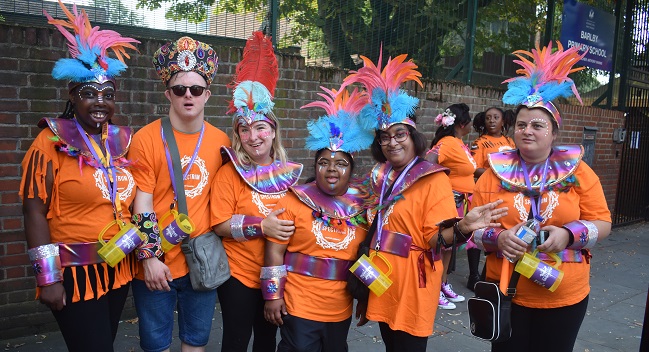 On Sunday August 25th, a group of people with learning disabilities strutted their stuff for all to see in the annual Notting Hill Carnival Parade for the second year running. Their message was clear as day: it’s our right to take part in carnival, it’s our right to have fun with our friends just like anyone else, we’re going to keep coming back year after year and no one can stop us.

The North West London-based group of around 20 came to the carnival along with family and friends as part of Harrow Mencap in partnership with carnival facilitators MaKING Carnival.

In the last two years our engagement with Notting Hill Carnival as a campaigning organisation and charity has been a part of our strategy to promote full and far-reaching participation and inclusion in wider society.

Carnival is an iconic, high-profile and internationally acclaimed event which has real potential to make a difference to the lives of people with learning disabilities and change the way they are perceived by the public.

We all know there is plenty of work to be done on making our society more inclusive. Exclusion, non-participation and a resulting lack of visibility has created negative and inaccurate stereotypes around those who have a learning disability with truly detrimental results.

The recent Whorlton Hall psychiatric hospital scandal, where people with learning disabilities were subjected to severe physical and psychological abuse, uncovered just how dangerous allowing the current state of affairs to fester unchallenged can be.

For us at Harrow Mencap, promoting social inclusion in the community, creating opportunities for participation and engagement, and changing social perceptions are all integral to addressing these issues.

This is where carnival comes in. The way we see it, the learning disability campaigning movement and the Notting Hill Carnival are fellow travellers. The journalist and activist Claudia Jones founded the carnival in the aftermath of the fierce Notting Hill Race Riots of 1958. Her aim in doing so was to bring white Londoners and their Caribbean migrant neighbours together, break down barriers, promote understanding and prevent such catastrophic events from re-occurring in the future.

Notting Hill Carnival was designed to unify the community and serve as a vehicle for social inclusion, which makes it a perfect medium for other excluded, misunderstood or underrepresented groups to carry the same message across. With this in mind, campaigners should all take note that carnival is an outstanding opportunity for people with learning disabilities to step into the limelight and make their presence known.

The people Harrow Mencap support have truly proved this point at carnival in the last two years. This group of people who have been marginalised, mischaracterised, ignored and pre-judged by society as unable to engage, take part in community life, work or interact with others, all of a sudden are just like anybody else dancing, singing, laughing, enjoying wearing costumes and getting their grooves on.

Our presence at the carnival has also gained media attention from mainstream outlets such as ITV London News and BBC Radio as well as the local newspaper, which goes to show that this message is getting out there and that issues around learning disability equality can reach the public eye through events like this.

Public reactions have been very positive too. The group from Harrow Mencap were an integral part of the parade with MaKING Carnival’s float along with around 70 -100 other revellers, mingling and partying the day away as one, engaging people from other parade floats and having a fantastic time.

The carnival day and the six-month preparation process including choosing and making costumes and practicing dance routines and moves have also been instrumental in confidence-building for those who attended as a part of our group.

When asked how she felt leading up to her first Notting Hill Carnival experience with Harrow Mencap last year, Laetitia told ITV London News “I’m quite anxious because you don't know how the people are going to react to people with learning disabilities and stuff, but when I was telling everybody else they were like don't listen to anyone just go for it!”

On arrival back in Harrow after a day of partying through the streets of London on the big day, elated she told the Harrow Mencap team: “I loved it. It's funny, you get people grabbing you and dancing with you as well.”

This year when asked to share a message with the public about Notting Hill Carnival 2019, she simply said “Come to Carnival and have a good time.”

It’s been brilliant to see how going to Carnival has impacted positively on the life of a person with a learning disability, leaving them more comfortable and confident to go out and engage as an equal citizen.

Brendan, a Harrow Mencap ambassador with a learning disability and cerebral palsy  who attended the carnival for the first time on Sunday summed up the difference going to carnival can make “Today is a new beginning, I hope there’ll be many more [disabled people] coming next year.” Carnival “has been the highlight of the year” he added.

The benefits of Notting Hill Carnival present those in the learning disability field with major opportunities to push for change. The exposure that this iconic London event can bring can make a difference; promoting inclusion, changing perceptions and making those with a learning disability more visible in the public sphere.

What’s more, the lived experience of Carnival itself can have a truly positive impact on people’s lives, providing a chance to build confidence, make friends, create memories for years to come and above all, have fun. We hope we’ll see you in Notting Hill next year!