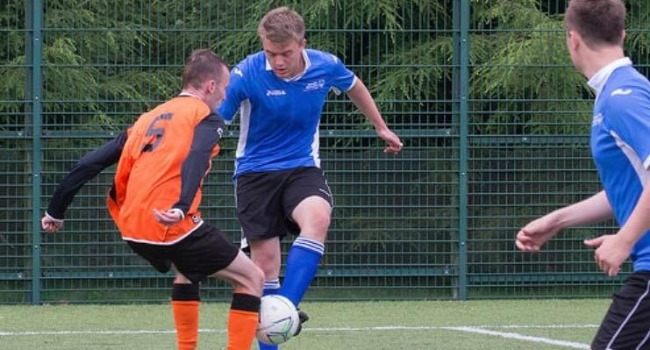 Diagnosed as being autistic as a two-year-old, other children didn’t understand how it made James different and he struggled to fit in.

But Liverpool fan James, 24, from Knaresborough, near Harrogate in North Yorkshire, got involved in disability football as a nine-year-old.

A sense of belonging

“When I was nine-years-old I was very low on confidence, wanted to play sport, but could never fit in.

“Like at that age, you’re a kid and you wish you could do anything — at that time of my life I did wish I could play football, like proper football, like Sunday league or whatever,” said Parker.

He started out with Killinghall Nomads disability team and it opened up his life to much of what he had been missing — friendship and a sense of belonging. Everything changed when he began playing for Harrogate Gateway Disability Football Club as a 16-year-old, which is run by the manager of the Mencap men’s national team Mark Summers.

Parker added: “As time went on at Killinghall I grew more confidence and more ability. But the real turning point was going to Mark’s club, because that’s where 90% of my friends socially are now.“

Beyond playing locally with Harrogate Gateway, Mark represented the Mencap national team in 2016 and competed at the Special Olympics in Los Angeles in 2015. Parker endured a troubled time with bullying in years seven to nine (aged 11 to 14), before signing up for Summer’s team.

“I was unhappy — this was all kind of before Mark’s club came along. It was good that I had, on a Tuesday night, something to do because there was a time when I was in myself.

“I didn’t have many friends coming round to the house so that was a big downer, if you like, back in those days,” he added.

Parker, who lives at home with retired parents David and Carol, added: “For me the football club has been a big success in my life because I obviously love my football.”

The power of sports

Though this year’s competition has been cancelled because of the Coronavirus pandemic, the Mencap national team takes part in an annual Europe-wide championship in Geneva.

Summers, 54, has seen dramatic changes in players who leave their local clubs and families for the first time to travel abroad.

He said: “We tend to see these guys come together as strangers, and by the time they’ve come away from the European Championships, they’ve got a whole new group of friends.

“So there’s a lot of social aspects to the game as well. It’s not just about kicking a ball about, it’s making friends, it’s building their self-confidence and getting a lot of fun out of the game at the same time.”

The Mencap national team, which plays 11-a-side fixtures, competes in the Geneva competition over five days.

Players range from 16 to 65-years-old, and the younger competitors develop not just socially, but also in their overall maturity through football. Summers added: “These kids are being put in a social setting whereby they’ve got to learn to behave accordingly and respectfully.

“So it’s not just seeing them mature probably a lot quicker than they would have done, but also the opportunities they get by going away with a club and the regional teams and the national teams — it’s a huge developmental experience for them as well.”

Motor skills is an area where Summers, a one-time amateur footballer whose career was cut short by injury, sees massive improvements in the players he works with.

“We have got some footballers which (sic) have got very severe learning disabilities, and quite a few of them do need one-to-one support to help them around the football pitch.

“But it doesn’t take long before they don’t need one-to-one support and they play the game of football totally unaided. And to see the improvement — well it takes a lot of parents by surprise, that’s for sure, and carers as well.”

Now a team of Chinese researchers from the School of Physical Education, at South China Normal University, in Guangzhou, has attempted to assess how far autistic people can benefit from physical activity. Their social and communication differences can make autistic children and adolescents less likely to take part in sports. It leaves them more vulnerable to inactive and isolated lifestyles linked to health problems like obesity.

The researchers reviewed 12 previous studies from the last decade that have investigated the topic, before concluding sport and physical activity had a “significant positive impact” on sociability, communication and motor skills in children.

Social and communication skills also improved for adolescents, but less so for motor skills.

Activities lasted between 45 and 90 minutes and in most cases the children and adolescents took part more than three times a week for between a month and six months.

Led by Jinfeng Huang and Guangxin Tan their paper, published in the International Journal of Environmental Research and Public Health, took in studies focused on water sports, football, aerobics, karate, horse riding and other physical activities. The 12 studies examined were meant to be randomised controlled trials — research projects where people are divided into two, with an experimental group compared against others that did no activity.

Discussing the limitations of their findings the researchers acknowledged that methods for splitting the children and adolescents were “not clear” and “blinding” was not mentioned in the 12 studies. Blinding is designed to prevent the participants or researchers knowing who is in which group to avoid any bias when the impact of the activities is being weighed up.

Also, in four of the studies physical activity was combined with “routine rehabilitation treatment”, so it’s unclear how far any improvements were down to exercise alone.

Caption: James Parker in action for Yorkshire and Humberside while competing in a Special Olympics event.

Caption: The Mencap men’s national team at the home of Bryntirion Football Club in Bridgend.