The government-backed schemes are designed to help young people with learning disabilities and autism gain the skills and experience needed to get a full-time job. Darren Devine reports. 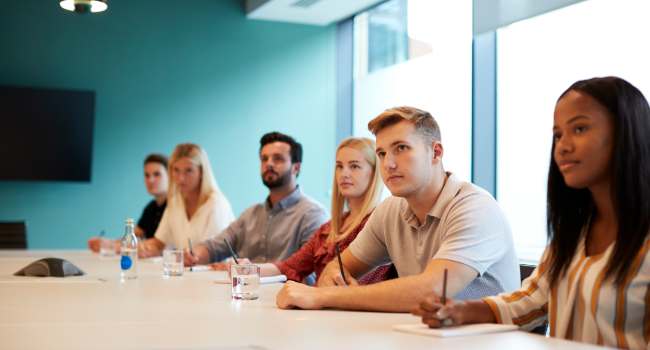 Darin Stevenson is just weeks away from starting his dream job as an apprentice in business administration at Strathclyde University. Stevenson, 21, who is autistic, will be working in the university’s international office in a role that will see him helping overseas students study at the Glasgow institution.

He got on the two-year apprenticeship after doing a Breaking Barriers course at the university. Organised by learning disability charity Enable Scotland, Breaking Barriers is designed to widen access to those with learning disabilities and autism. Under the programme, students aged 18 to 24 study for a certificate in applied business skills at the university’s Business School and the course involves work experience.
Stevenson, who worked in customer services for Asda whilst he completed the course, said going to university and being in work has made a “massive difference” to his life.

"It’s life-changing to get them moving straight from education into employment — not just for them, but for their families.”

Supported by the Scottish Government, backers of Breaking Barriers insist it has been a success. Theresa Shearer, Enable’s chief executive, said people with learning disabilities see their careers, ambitions, and life opportunities - like forming friendships - suffer because they are less likely to attend university. She believes Breaking Barriers is “truly groundbreaking”.

How effective are the schemes?

Reports suggest over a third of graduates from a pilot programme for Breaking Barriers went on to work or further study. However, others feel that while schemes to get people with learning disabilities into work have the power to transform lives, little is done to monitor their effectiveness.

He said: “There is a lack of published data about outcomes on internships.”

Inclusion group Preparing for Adulthood, who work to ensure young people with special needs live fulfilled lives, found over 1000 people have benefited from supported internships. Their research discovered 50% have progressed onto some form of paid employment. The findings suggest there are currently between 570 and 770 young people on a supported internship, with most run through further education colleges or councils.

But Davies believes the research findings may present a skewed picture, with those with the most promising results more likely to respond to Preparing for Adulthood’s research. “Even if we do know the outcomes to internships, it doesn’t tell us whether those outcomes are sustained", he says. "So the danger is [that] we’re spending a lot of money putting somebody through an internship, getting them a job, and then they may lose it four months later without anybody knowing.”

Davies said internships are only open to those with an education, health, and care plan (EHC); these are the documents brought in under the 2014 Children and Families Act to replace statements of special educational needs. With councils still grappling with the UK government’s austerity agenda, getting an EHC plan can be “extremely difficult” in some areas, says Davies.

But Davies insists a well-run internship can massively improve the lives of those with learning disabilities. He said: “It’s life-changing because the chances are if they don’t get a job by the time they are 25, they are going to find very little chance of getting a job for the rest of their lives. So it’s life-changing to get them moving straight from education into employment — not just for them, but for their families.”

Julie Pointer, who is Preparing for Adulthood’s programme manager, admitted that keeping people with learning disabilities in jobs can be difficult and sometimes extra support is withdrawn too early. Pointer said people in supported employment need ongoing help through approaches like training in systematic instruction (TSI): a way of breaking down tasks so people understand the job. She said: “If that isn’t there then the young person will fail. I think some of the challenges are around that only being there for a short period of time. Young people need to have graduated support and someone who has got the skills and knowledge to check that the job is still working for them and to check whether there are any issues or challenges.”

In November 2017, the government announced £9.7m for councils to increase the number of supported internships and other routes into work for young people with learning disabilities. Councils were given the cash to set up supported internship forums involving local employers, colleges, young people with special needs and their families. Pointer said that councils can end their involvement with the programmes when they are under financial pressure, but this is a short-sighted approach.

She said keeping a job not only has health and welfare benefits for the person, but can also save cash because they are not relying on benefits as their only income. Pointer added that setting up a strong supported employment service helps young people not only “have an opportunity to go into work, but stay in work as well.”

The Department for Education were asked to comment but did not respond.

Caption: Darin Stevenson is now just weeks away from starting a business administration apprenticeship with Strathclyde University after completing a Breaking Barriers course at the university.