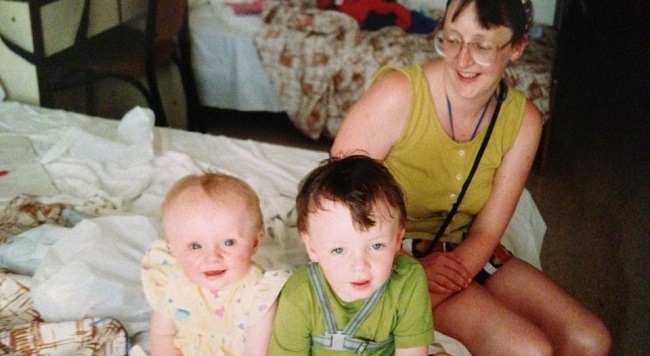 Can technology ever be a substitute for care? David Cherry says the life of his sister Ruth is being put in danger by a decision to replace her overnight carers with telecare.

"I don’t want to be too personal, but the scent — you don’t get that through a camera."

Its advocates insist it can improve the care of the most vulnerable with listening devices able to pick up on unusual sounds at night or cameras that help ensure abusive staff are rooted out. But what happens when technology ends up replacing the support workers or carers whose efforts it’s meant to enhance?

Siona Cherry, from Giffnock, near Glasgow,  believes the compassion support workers brought to the life of her daughter Ruth, who has autism, epilepsy and a severe learning disability, has been sacrificed to save money.

In September East Renfrewshire Council got rid of overnight carers looking after Ruth, who is non-verbal and doubly incontinent, and replaced them with a telecare system. She’s now locked in the house between 10pm and 8am.

Siona, 54, is so disgusted by the move she has stepped into the carers’ shoes and is now staying in her daughter’s house overnight. Otherwise, Ruth, who cannot wash or feed herself, would be left alone for 10 hours each night.

But because Ruth is meant to be managing alone with the video link, Siona needs the permission of the telecare staff to intervene when she believes her daughter requires help at night. If the system picks up sound or an epilepsy alarm is triggered the person who monitors Ruth’s cameras makes a decision on whether to send out a responder.

Siona said: "A lot of nights they have just said, ‘No, she doesn’t need anybody’, but, actually, every morning she’s been soiled. A couple of times I have phoned and said: ‘Look, that’s gone on too long I really feel I can’t ignore that. And they’ve said, ‘Alright, we’ll send somebody out’."

Siona said her daughter’s limited communication skills make it difficult even for those who know her well to understand her — let alone a stranger on the other end of a telecare system. She said the telecare monitor will wait for Ruth to vocalise several times in the night before sending a responder and on one occasion she was left shouting for two hours before a decision was made to check on her.

When she was living at home family members would get Ruth a drink or change her in the early hours “several nights a week”, said Siona. And the overnight carers operated in the same way.

Siona added: “If they were up at the toilet, or having a cuppa or still up and about, they would constantly check her. And obviously, I don’t want to be too personal, but the scent — you don’t get that through a camera."

Mum-of-three Siona said she now chooses not to intervene overnight because she wants to see how the system would function were Ruth left alone. "Partly from my side of things I want to see how it’s run as if I wasn’t there," she added.

Ruth, 27, still lived at home with Siona, dad Iain, 56, and younger brother Stuart, 20, until around nine months ago. The family agreed she could move into her own place last January because round-the-clock care was available through support workers.

Ruth’s family believes the council’s move has forced them to get back involved and undermined the independence Ruth achieved by leaving home. Also, Siona is already juggling demanding caring responsibilities as Iain has epilepsy and Stuart autism.

Ruth’s brother David has posted a petition on change.org calling for her overnight carers to be reinstated. By October 31 it had attracted nearly 87,000 supporters. Filmmaker David said while the technology may be suitable for someone "who is quite high functioning", it’s "terribly inappropriate" for his sister, who spends most of her time in a wheelchair and can walk only short distances.

He added: "It felt like a lot of progress has been made and certainly when she moved into this house in January it was really exciting because it looked like Ruth was fully set up for her independent life, regardless of what happened to me, mum and dad.

"And then with mum and dad as well, it was a chance for them to recover and rest from being very intensive carers for her and my brother for a long time." Spokesperson for Autistic UK Kat Humble said while technology can vastly improve people’s lives, it "can also cause great harm if applied without consideration of the users".

Humble, who has autism, said the telecare system Ruth is relying on is "not meant for anything but emergencies". She added: "Because electronic monitoring systems are so much cheaper than human carers, the temptation for authorities to use them in every instance is far too great."

"The needs and dignity of the individuals that they are meant to be helping are not even considered." Humble, who uses a wheelchair, said the technology was leaving disabled people "dehumanised".

She said the failure to consider individual circumstances was “illegal” as the Care Act specifies authorities should do nothing that results in people needing more support or makes their situation worse.

Also, Humble said while on their website the council insists telecare "doesn't replace your family or carers who visit you at home", that is exactly how it has been used in Ruth’s case.

A spokesperson for the East Renfrewshire Health and Social Care Partnership, said the telecare system was not about  "de-personalising care", but ensuring people could "live independently at home for longer".

The partnership, which is an NHS and council run body, added: "When Ruth moved into her own home in January 2019, we spent several months extensively assessing her needs day and night, so we could ensure we had the best care in place."

"The technology is not a one-size-fits-all solution — it has been tailored to meet Ruth’s specific needs and capabilities overnight, and is monitored by specially trained staff."

Image: The family when growing up.