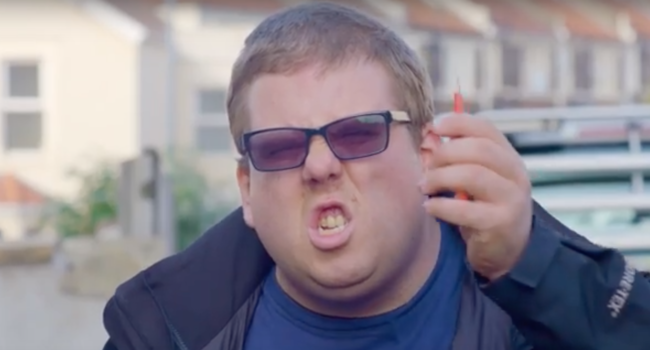 'Moaning, Crying and Barking' is a film by Chris Butler that takes a comic look at sensory sensitivity.

It explores how Chris would like to deal with the world around him when things get too much. Chris made the film with support from Misfit’s Theatre Company and Calling the Shots; it was produced by as part of the Arts Council funded Random Acts production scheme.

Noises get on my nerves all the time. Loud noises particularly I find very annoying.

People talking loudly, screaming children. I don’t mind dogs, so long as they don’t bark. I think there are other people that don’t like these noises too, so I wanted to make a film that shows how it feels to be surrounded by noise like this.

This is the first film I have made. I heard about it from the Misfits Theatre Company and they invited me to come to a workshop to learn about the project and to talk about ideas for films we wanted to make. This was my first idea for a film and they helped me write it down and enter the idea.

Steve from Calling the Shots helped me make the film. I really liked working with the actors - most of them are my friends - and working with the crew. In the film, Phil Godfrey plays the main character, Adam. He is based on me and what I wish I could do when there is a really annoying loud noise. Making the film was really good fun, but it did take a long time to do each shot and I found that quite frustrating. I didn’t like the waiting around.

It’s also got animation in it and I liked coming up with the ideas for what the drawings would be like.

I wanted more people to see the film. I hope they will like it.

I have got some new ideas for films, I want to make a film that is something to do with space.

'Moaning, Crying and Barking' is being shown as part of the Discover Oska Bright session during Oska Bright Film Festival 2019.